Quick recap: A bunch of rich people do dumb rich people things like have affairs with their friends and needlessly kill small animals. And despite being on the brink of a war, no one mentions anything related to Hitler’s escalation.

Fun(?)fact: Although partly a myth, the film was really unpopular when it was first released. One person tried to burn down the theater it was playing in using a lit newspaper.

A conversation with my 11 year-old, after we had finished watching this movie-

Me: You are a trooper for sitting through two hours of subtitles and watching something made in the 30s!

B: You didn’t like it? I thought it was really funny!

Me: Maybe I just didn’t get the humor. It’s probably something complicated like every character stands for a different aspect of high society.

B: I just thought everyone was ridiculous, especially the guy who couldn’t get out of the bear suit. The one part of the movie I didn’t like was when everyone went hunting and killed all those rabbits and birds for no reason. I hated them

Me: Well, anyway, I’m going to do some research and find the true meaning of what this movie was about. French films are always way more complicated than they appear.

And then after ‘hours’ of research (I read the full Wikipedia article), I realized that my kid hit the nail on the head. This movie is about the ridiculousness of society and how they could throw parties and fall in love and get stuck in bear suits when World War II is on the cusp of beginning. And the hunting scene was put there to show how casually the rich felt about the taking of innocent life. If that wasn’t too on the nose for you, there is also a scene in which two women discuss getting the new Diphtheria vaccine. Because when you are rich, that is just a choice you can make. Good thing we’ve never had to revisit that discussion!!

As it turns out, my son would make a good reviewer one day. Then again, he hasn’t sat through the pile of French films I have and developed his own jaded attitude. One day, kid. One day.

Up next: Man of Marble 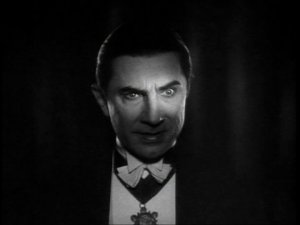 Having no time to do much of anything besides work these days, I feel it most efficient to combine two similar movies into one post. Interestingly, the 1001 Movies to See Before You Die list is chock full of various vampire films. I watched these two for Horrorfest this year but there are several more just waiting for my attention. In this post I will put Dracula head to head with…….Dracula, to see which film is the most Dracula of all time.

Opening scene: This round starts as a tie, since both begin with a traveler. The 1958 version edges ahead by just a bit because of the captured woman begging for help.

First Dracula appearance: no competition here, the 1931 version featuring Bela Lugosi is the champion. The first moments with him are creepy but also intriguing and I kept wanting more and more of this character.

Best looking mansion: Both mansions are creepy in their own rights but when I imagine the Transylvania castle, it’s the 1931 version that sticks with me. There’s just something about the appearance of abandonment that sends more chills than an ornately designed place. In other words, I would totally AirBnb the 1958 version and stay far away from 1931.

Renfield: This also goes to 1931 since 1958 didn’t have the character at all. Renfield should be necessary to any Dracula retelling.

Best Mina: This was a tough one! The 1931 version shocked me more but the 1958 version was just so dark. She was enthralled by Dracula and you could see how she both tried to fight but also gave in so easily.

Best Blood: Once again, 1958 is the winner. The director never shied away from any gruesome scene, and I can see a clear link between this film and later bloodbaths such as Saw and Hostel.

Overall Impression: Despite sharing a number of characters and a basic plotline, these Draculas are so different. If you are looking for a classic retelling of Dracula, maybe something to show at a Halloween party, you can’t beat the 1931 version. But if you like your vampires to be oozing with sexuality, then the 1958 is the way to go. The 1958 version is also especially melodramatic, if that’s also your thing.

Watchability score:  4/5 for both films and a proper ending to a too short Horrorfest

Quick recap: The classic story of Dr. Frankenstein, who manages to create a monster that wreaks havoc on the countryside and still lives happier ever after.

Fun (?) fact: Boris Karloff, who played The Monster, was such an unknown that he wasn’t even invited to his own film premiere.

Welcome to another year of Horrorfest, that wonderful time of year when I only watch Horror movies from the 1001 Movies to See Before You Die list. In years past I have done themes but this year my goal is to watch whatever is streaming.

We start with Frankenstein, which is actually the perfect movie to kick off this celebration. As a monster, its terror factor falls somewhere between witches and werewolves. A bit scary when you think that it’s a dead guy, less scary when you realize his childlike nature. I talked my 11 year-old into watching the movie with  me, although he has vowed to not watch any horror. ‘Space is frightening enough for me!’, he brings up quite often.

We both agreed that the effects were so good for this era and both regretted a little that we have lived only through the parodies and references. I think had I been around in the 1930s, this definitely would’ve creeped me out some. The first ‘reveal’ as Dr. Frankenstein coaxes The Monster into the light is so masterfully done. It gave me chills in a way I didn’t imagine a movie this old could. The fear was short lived as Karloff does such a wonderful job of playing a frightening monster as well as such a sympathetic man. My son felt the same until the scene where he drowns the little girl, and then he wanted only revenge. I’ll admit that scene of the father carrying his dead child through the wedding celebration was absolutely heartbreaking, but I still just wanted The Monster to be ok and maybe be loved by someone.

But that’s not to be, as we all know. I remember being shocked when I read Frankenstein in high school to find that it doesn’t end the same as the movie because to me at the time, they were one and the same. It says something to the makeup artists and designers that our version of Frankenstein comes directly from the movie and not the novel, even though it paints a much more horrifying picture. Even the beginning credits seem to downplay the novel, referring to Mary Shelley as ‘Mrs. Percy Shelley’. And the scientist seems more situationally mad in this adaptation as well, which I guess helps the audience to forgive him at the end for making something so awful.

Watchability score: 4/5 This made me want to binge watch all of the monster films of this time period

Up next: Only Horrorfest knows!

Quick recap: A child murderer is on the loose and everyone wants to see him caught: parents, the police and especially the criminals, whose good name is being ruined.

Fun (?) fact: Several groundbreaking techniques debuted in M, like voice-over narration and a musical theme to signify a character. 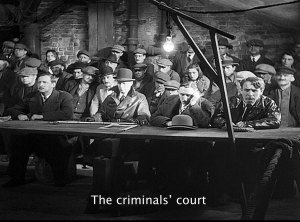 So, M was not the movie I expected at all. Not that I expected much because all I knew before watching it was that it was German and made in the early 30s. I pictured a mix of The Cabinet of Dr. Caligari and The Jazz Singer. Boy, was my face red when the very first scene was of a group of children singing a song about a murderer butchering them to bits! I still wasn’t quite sure what I had gotten myself into until a few scenes later when the little girl’s body has been dumped in a clearing and the camera focused on her balloon, no longer tethered, drifting into wires above.

like most things made for children back then, this balloon is a whole other level of creepy

I would be simplifying things too much by calling M a ‘murder mystery’. Yes, murder takes place but Fritz Lang not only wanted to show how different sides were impacted but to get the audience to empathize with each one:

The parents: the first scene of a mother lovingly making lunch while waiting for her child to arrive home from school (which never happened) was especially heartbreaking to watch.

The citizens: The entire town was in a frenzy and willing to suspect literally anyone talking to a child but at the same time, they were dealing with a serial killer who left zero clues.

The police: It’s always fascinating to learn how police solved crimes before DNA matching. In this case, they had one fingerprint and……that’s about it. And the longer it took to catch the murderer, the greater chance the city would lose their collective mind and more children would be killed.

The criminal underworld: Did NOT see this one coming but it makes sense. The police began raiding bars every night and rounding up anyone without papers because they had nothing else to go on. As a result, the criminals weren’t able to do their various illegal activities- which tended to pickpocketing, not murdering children.

And finally, the murderer himself, a former asylum patient released as cured but very much still sick. Played perfectly by Peter Lorre ( a little too perfectly because he had trouble shaking the role even years later), the murderer is so very creepy as he whistles ‘In the Hall of the Mountain King’. But I couldn’t help but have sympathy for him as he tried to outrun the mob. His most powerful scene comes during the ‘trial’ with the criminal underworld as he begs for mercy because he couldn’t help himself. And as disgusted as I was by his actions, I believed him. In the final few minutes of the film, the police arrive and arrest him before mob justice is carried out. He gets the treatment he needs but the parents are left asking if justice was really served. It’s a question we still ask to this day without any clear answer.