Quick recap: A Jewish teen, Solomon, escapes Nazi rule by hiding out in a Communist orphanage. After being ordered to close, Solomon’s only chance of survival is to join the Hitler Youth.

Fun(?) fact: The movie is based on a true story. The real Solomon Perel can be seen singing at the end of the film. 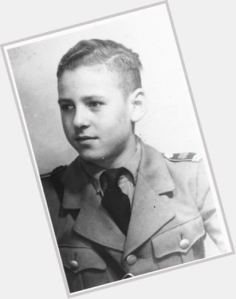 Up next: Guys and Dolls

Fun (?) fact: When Quentin Tarantino worked at a video rental place he couldn’t pronounce the name of this movie and so called it ‘that reservoir film’.

Knowing only that this was a French film about a boys boarding school, I already had some expectations of what I might encounter:

And this movie had all of that but also it was an emotional gut punch. I don’t use that term often but there’s just no other way to describe what I watched. As a matter of fact, after the credits were finished and I had mostly stopped sobbing, I grabbed my 10 year old and made him watch it with me again because it is just so important.

What makes this movie so unique is that the audience gets lulled into a false sense of security. On the surface, this is a story about a boy who is an outsider (Julien) who forms a strong bond with the new kid (Jean). It’s been done before, of course, but what’s different is that Jean is not just a new kid- he’s Jewish and being hidden away in this Catholic school during the height of World War II. Aside from a few clues- he doesn’t pray with the others, he doesn’t eat pork and his real last name is Klippenstein- the matter isn’t discussed in detail. For the most part, these boys are all surviving the war in their own way and how they treat Jean is similar to how they might treat any newcomer who happens to be very bright and introverted. It really made me think everything would be ok and the plan to hide the boys would work.

But of course, it doesn’t. The Gestapo raids the school and because of an unintentional glance towards his friend, Jean is outed by Julien as Jewish. The last scene of the boys standing in the cold and saying goodbye to their principal as he and the Jewish boys are taken away is one that will live with me for a long time. According to the director, who says this film is mostly autobiographical, all 4 were sent to a concentration camp and later murdered.

Watchability score: 5/5. Essential viewing. We also watched Jojo Rabbit afterwards, which turned out to be a suitable companion piece.

Up next: Sweet Sweetback’s badasssss song

Fun (?) fact: This was one of the first movies to come out from the USSR that didn’t involve propaganda. 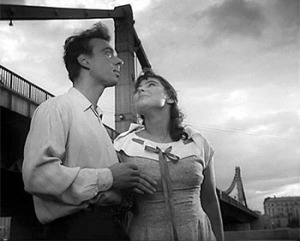 My thoughts: Am I bad person for wanting this to be chockfull of propaganda? I find those films fascinating because I like to see if I actually come around to the idea.

Salt of the Earth and All Quiet on the Western Front: YES

Storm Over Asia and Sergeant York: big fat NO

Alas, this was not one of those films, but instead another depressing one about war and its consequences. War is hell, y’all.

Right off the bat, I totally bought into Boris and Veronica’s relationship. They weren’t just cute together, but their playful banter felt genuine and not too over the top gloopy. I especially loved his nickname for her: squirrel. What I didn’t love was that he volunteered to go to war and literally left the next day. And even more than that, I was crushed that the two didn’t see each other before he shipped out. Like I said, I was all the way invested in this relationship. Now, I don’t claim to know a lot about Russian history so I’m not even going to try and sum up went on the war. All I know is that it was rough and not just for the soldiers. Even with a victory, I knew that the characters faced a long road ahead of them. And boy did they ever! For starters, Veronica’s parents are killed in an air raid. And then when she moves in with Boris’ family, his cousin Mark rapes her during another air raid and the two have to get married. AND THEN BORIS DIES. This movie was on a whole other level of drama I was not prepared for. As sad as it is, apparently Russian audiences really identified with the plot at the time. This movie was the first time many of them felt like it was ok to grieve for their suffering and hardships. It really made me think about all the bullshit governments put the common people through for the ‘greater good’.

Aside from the stellar acting and plot, there were many scenes and close ups that were gorgeous. The camerawork felt modern and had it not been in black and white, I might think this movie was a recent addition. Cinematographer Sergey Urusevsky used hand held cameras for much of the movie, and is one of the first to do so. The result isn’t shaky, thank god, but instead, seems like a more intimate look into the lives of a family going through a horrible time.

Up next: Days of Heaven

Quick recap: Two children cope with the horrors of war by creating a pet cemetery  (not the Stephen King kind). 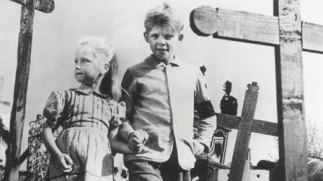 What a lovely romp this movie was!

Fun (?) fact: The movie was originally shot as a short but was then changed to feature length. By that time, the actress who played Paulette had lost her baby teeth so for many scenes she wears false ones.

My thoughts: Picture it: A board room, somewhere in France. Let’s go with a board room in the Eiffel Tower because that’s about the only landmark I know. In walks René Clément, director of Forbidden Games and the writer for the screenplay, Jean Aurenche.

René: Alright, I like the plot of the film, but I feel like it should be more sad. Children growing up in World War II is depressing, but we can do better.

Jean: What if we kill off the girl’s parents?

René: It’s a start. I like where you are going with this, but let’s dig deeper.

Pierre, the custodian, who has apparently been standing in the corner of the room this whole time: Kill a puppy.

René and Jean stare at Pierre for a moment, stunned.

René: Break out the champagne, Jean! We have a hit on our hands!

As this totally accurate scene shows, Forbidden Games is another depressing war film. It’s sweet how the boy, Michel, takes care of the little girl Paulette, but there’s just so much that is sad.And then you add in all the dead animals and I could barely watch many scenes. There’s a particularly sad exchange between the two children as Michel explains to Paulette that her parents are dead and have been buried in a mass grave. She reasons it is because they are cold and need a spot to warm up and that’s where the idea of a cemetery is born. It was heartbreaking to watch that and it doesn’t help that those two kids are just about the cutest I’ve ever seen. For now, though, let’s turn back to that board room in France as René and Jean try to write an ending to their movie.

René: I think we’ve hammered home the point that war is hell with all those death scenes. How about a happy ending to give the audience a break?

Pierre, who still hasn’t left his corner, spits on the ground in disgust.

Jean (stammering): Paulette has to leave Michel’s family and is reunited with a distant Aunt?

Pierre walks over to Jean and slaps him in the face with all his might. Jean, holding back tears, stands up.

Jean: How about Michel is about to be beaten within an inch of his life and Paulette is taken away to live in an orphanage? She waits at the train station and sees all these reunions around her. Someone yells the name, ‘Michel’, which causes her to run away from the nun, in search of the only person alive who cared for her.

Everyone in the room high fives and opens another bottle of champagne. Pierre nods ever so slightly and leaves the room, his job done.

He returns seconds later to gather the trash from the bin, remembering his real job, nods again, and walks out.

Final review: 4/5. Depressing as hell, but an interesting perspective at least

Up next: Glengarry Glen Ross