Quick recap:  Johnnie, played by Buster Keaton, is on a one man mission to rescue a locomotive from the Union soldiers who stole it. As always, hijinks ensue.

MRW school is getting close to starting again

Fun (?) fact: This movie is based off of a much less hilarious incident during the Civil War. Union soldiers stole a train dubbed ‘The General’ and drove it north, all the while destroying power lines and train tracks. They were eventually caught by Confederate General Nathan Bedford Forrest ( who founded the KKK). The men were found guilty and hanged.

My thoughts: I enjoyed The General much more than my last Buster Keaton film, Steamboat Bill Jr. I cheered on Johnnie from the very beginning because he was just so darn likeable. Than I realized he was on the Southern side of the war, meaning I was basically cheering for slavery. But then I remembered the North eventually won, so it’s ok to support a small victory like this.

Keaton made me laugh much more this time around, especially during a scene involving a cannon. For the first shot he is careful to put in the correct amount of gunpowder but when the cannonball nearly blows up his own train, he says ‘screw it’ and poured the whole keg of powder. There was only a minimum of slapstick in this film, although considering it is a silent film, most of the gags are still visual. The General seems like more of a mature film than other silent ones I’ve watched- the plot is succinct and action makes up a large part of the run time, because what’s the point in having several minutes devoted to watching the actors’ mouths move?

I was most surprised by how in depth I got to understand Johnnie’s character. Most silent films have archetypes that are easily identifiable but they don’t stick around for long. This movie is just the beginning to showcase how films can be used as a character study. The very first scene shows Johnnie hard at work as an engineer and then as he walks to his girlfriend’s house, two little kids follow him and mimic his every move. He doesn’t mind it, although he gets a little annoyed when he wants some privacy time with his love. It’s such a little moment but it says so much about his character. And the ending sealed the deal for me. Johnnie is finally hailed a hero and it was so sweet to see him finally get his recognition.

Up next: Good Morning, Vietnam

Quick recap: A documentary-ish about Witchcraft through the ages 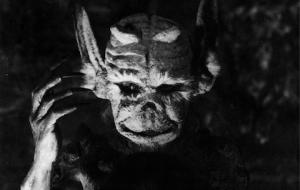 Fun (?) fact: Director Benjamin Christensen originally planned on writing the script with the help of experts but dropped that idea when he learned they were against his movie.

My thoughts: Another year of HorrorFest is in the books and another year where I still think the 1920s were a pretty creepy time. Häxan alone didn’t do much for me because I’m decidedly’meh’ on witches, but people dressed in costumes as witches and you can GTFO with that nonsense. I’m not talking about the sexy kind we have walking around these days, but the ones with dead eyes featured in this film.

Häxan is half dry documentary about the history of witchcraft and half stories that the director heard. The dry documentary part was more interesting to me than the vignettes because people a long time ago imagined some pretty scary stuff. I’m all for science and learning how the world works, but sometimes it would just be nice to blame things on witches, you know? Like, it’s not my fault I didn’t get grades on time- my witch is a neighbor! I was going 30 mph over the speed limit because a witch cursed my foot. It works in every situation. We make jokes how stupid people back then used to be but they sure were the masters of shirking responsibility.

The vignettes are your typical witch fare of curses and making weird brews in a big pot. One ‘fact’ the director wanted us to remember is that witches like to kiss the butt of the devil. He mentions it 3 different times, complete with recreations of a bunch of witches lined up, ready to literally kiss ass. It seems like such a weird thing to focus on, as if that is the most offensive thing witches do. I didn’t know that was a thing before the movie, however, so I can’t completely hate on it. The more you know, I suppose.

Final review: 1/5. I’m still ‘meh’ on witches, but please don’t make me look at people dressed up during Halloween in the 1920s. 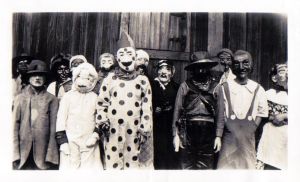 Up next: The Wizard of Oz 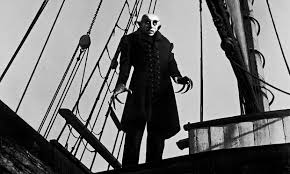 ‘the death ship had a new captain’- If that’s not the most emo title for a song, I don’t know what is

Fun (?) fact: The creature the guests at the inn called a werewolf was actually a hyena. I knew it! Also, I have many questions as to how it was easier to get a hyena than a wolf. 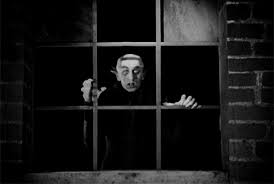 You’re a vampire, buddy. Stop being a creeper and go bite that neck.

My thoughts: Welcome to Horrorfest 2016, where I watch only horror films from my list. I saw Funny Games a few years ago during this time so I don’t think I’ll be traumatized much this year, but you never know. Nosferatu wasn’t scary unfortunately, but it’s such a classic that I didn’t really mind.

I got a chance to watch Nosferatu at the Drafthouse with a live band that wrote an original score. Yes, it was as badass as you imagine it could be. I’ve had the pleasure of watching a few silent films at the theater now, and each time it makes me wish I could watch all films this way. Sitting on my couch, even with the lights off, wouldn’t have made Nosferatu creepy but when there is a haunting score mixed with other-worldly whispering, it really turned the mood into something more sinister.

Nosferatu as a character didn’t scare me in the slightest. In fact, I kind of felt sorry for him because he was so weird looking. His teeth reminded me more of a rabbit than vampire and the way he moved just made him seem like an old guy with really poor social skills, especially the scene of him running around town with his coffin full of dirt. It was then that he seemed more scamp than menacing vampire.

The concept of Nosferatu,rather than the character Nosferatu, stuck with me long after the movie was over. There was something so haunting about evil moving into a town that had no idea what was about to happen and powerless to stop it. It reminded me a little of the recent Ebola outbreaks in villages and how neighbors just had to sit back and watch as death consumed the people they loved. This may be a vampire story, but the idea sure isn’t. 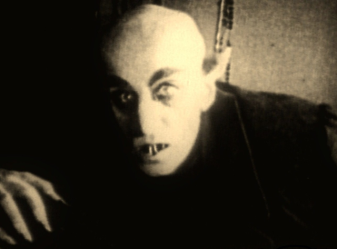 Quick recap: A con artist, Count Wladislaw Sergius Karamzin, seduces many people and swindles them out of a lot of money. 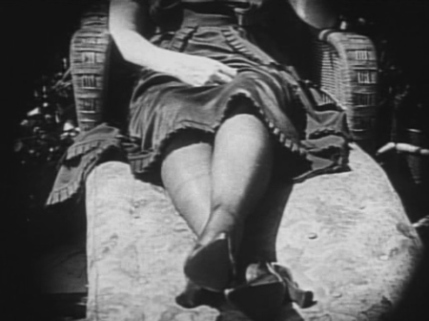 Look at those ankles, though. Who could resist that??

Fun (?) fact: Director Erich von Stroheim (who also played the Count) insisted on everything on set being of the highest quality: the champagne, the caviar, the underwear. Not surprisingly, he went way over budget.

there were also these weirdly poetic cards thrown in

My thoughts: My 1001 Movies book added Foolish Wives, based on the 85 minute version. As is my life, though, the only version I could find online was the two and half hour one. The movie was originally 6 hours so I guess it could’ve been worse. Still. I appreciate von Stroheim’s attention to detail, but this movie dragged on and on and on.

The Count had a pretty successful operation going on until he took it too far. At one point in the film, he had promised marriage to the maid and also had his scheme going on with Mrs. Hughes, the rich American wife. As if that wasn’t enough, he was probably sleeping with ‘Princess’ Olga and her ‘Cousin’, Vera. And then, for some reason, the Count also went after a guy’s intellectually disabled daughter. Now, I’m not an authority on schemes by any means, but that just seems like a lot to keep up with. I’ll give to him, though- he would’ve gotten away with it, too, if it hadn’t been for that meddling maid who burned down the castle with him inside. He lived, of course, but was disgraced when he jumped for safety without trying to save Mrs. Hughes first. That’s actually really funny, now that I think about it: this dude was sleeping with all these girls, running a counterfeit money ring and who knows what else, but it was manners, or lack thereof, that did him in.

People in 1922 went nuts over all the fancy things in the film and specifically the sets, which were built exclusively for Foolish Wives. It didn’t impress me all that much because that’s the age I live in, but I can see how exciting that would’ve been back in the day. I watched a version of the film that was very blurry so had I watched something more high quality, I would’ve appreciated it a little more. I was impressed, however, with the camera angles. I’m not going to attempt to describe them but it wasn’t just a camera set on the actors. The focus was much more advanced than I have seen in a silent film before and it kept me from going insane from the dragging plot. 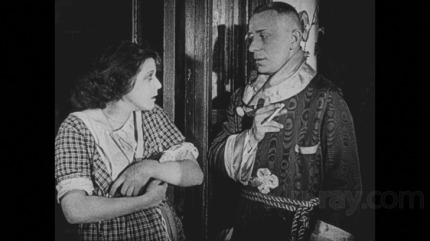 The Count looked like Macklemore in some angles, which kept me entertained more than it should’ve.

Final review: 3/5. Would I watch this again? No. But it was more interesting than I thought it would be.

Up next: Rio Bravo