Quick recap: Metropolis is a future dystopian urban society where class issues abound. You’ve got the workers who keep the city flowing and alive and then there are the wealthy members who have helped create the city and now spend their time going to crazy parties and frolicking through the meadows. And as if you had a hard time understanding the difference, the workers live way, way underground and the wealthy people live way,way above ground. The story centers around Freder, the son of the man who rules the city and a woman named Maria who just sort of shows up in the catacombs underground. The two of them spend their time trying to bridge the gap between the increasingly impatient workers and the wealthy businessmen. There’s also a crazy inventor and machine man, for good measure.

turn that frown upside down, fellas!

Fun (?) fact:  Although director Fritz Lang was Jewish, he was given a ‘pass’ from the Nazi party because they loved the film so much. Being a smart person, he fled Germany right after getting the pass.

My thoughts: I have been looking forward to this movie ever since I got started on this project. After watching so many American silent films, I had become bored by the same plot points and same actors. After watching The Cabinet of Dr. Caligari, I began to have a little more hope. Dr. Caligari was not a favorite movie of mine but I could appreciate a director choosing to do something so fantastical rather than everything Griffith was churning out. Although I am now watching movies out of order, I loved getting to go back to the silent film era for a bit and be completely impressed and in awe of what I was watching.

One of the most important elements of Metroplis is that the plot is complex. The film centers around the idea that the hands and the brain need the heart to mediate. Hands being the workers and brains being the industrialists and the heart being Freder.  The characters, too, are as complex as the plot. I like that Maria’s origin is never discussed, just that she showed up one day, promising a mediator. I loved the scene where she is introduced. She brings all the workers’ children above ground to the garden so that they can meet ‘their brothers and sisters’. Considering that this movie was made in the 20s, it’s still a concept people have trouble with- that we are all human and all the same. 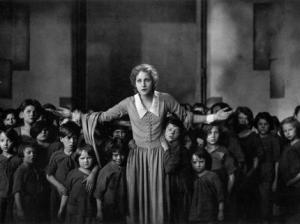 The message of the movie was a little muddled, but not in a negative way. Some people see it at face value, that it is nothing more than a sci-fi film. But there is also a bunch of religious imagery- the Tower of Babel, the apocalypse, the 7 deadly sins, Maria ,who brings a savior. There were parts that seemed more morality play than epic movie. Another thought is that the movie carries a rather heavy political message. The workers have been mistreated but they are integral to the city staying alive. At the same time, the industrialists are overbearing, heartless jerks but they too are necessary to the city. I saw many parallels in the movie with the political climate at the time in Germany. I’m not really sure who The Mediator is supposed to be, though. Is he government or is this a pro labor union film? The messages might not have been intentional, but it is interesting to look for them, nonetheless.

I think my favorite part of the movie was the machine man, or as I refer to her- Evil Maria. Rotwang, the inventor, captures Good Maria at some point and create a machine in her image that will turn the workers into a mob, intent on bringing the city down. Evil Maria was definitely bad but I loved her crazy expressions and Evil Dancing. It was also an interesting plot point to have the workers, who have been seen as helpless victims, turn into a destructive mob. They get so out of hand that they begin breaking machines and consequently flood their city where the children are.

How do you solve a problem like Evil Maria?

Final review: 4/5. I happened to watch the 148 minute version which was an unforgettable experience and yet not something I want to repeat anytime soon. I was completely riveted with all the details of the city of Metropolis as well as the machine man.

Where I watched it: Alamo Drafthouse. Watching a silent film on the big screen has been one of my favorite experiences of this list so far