Quick Recap: Clarice Starling, fledging FBI investigator, has been asked to interview one of the most notorious serial killers of all time- Hannibal Lecter. Although he is known to not talk to anyone, he takes a liking to Starling and decides to help her solve the case of another serial killer. Instead of just giving the FBI the information they need, Dr. Lecter gives clues in the form of anagrams and cryptic statements. In the end, Starling cracks the code and saves the day! Lecter, on the other hand, disappears to eat more faces. Awww.

There’s a meme for everything! As well as fan fiction, but I’m not jumping down that rabbit hole tonight.

Fun (?) Fact: In interviews, Anthony Hopkins has said the voice of Lecter is a mix of Truman Capote and Katherine Hepburn.

My thoughts: In full disclosure, I must say that I saw this film back in high school and for some reason really loved it. I immediately went out and read the trilogy by Thomas Harris and also watched the other two movies in the series. Part of me is embarrassed by how much I took to the gruesome story of a serial killer, but then I see that there is a tv show called ‘Hannibal’ that is rather popular and I don’t feel so bad. 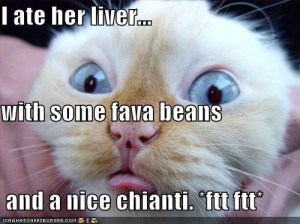 So, in rewatching this movie years later, I can still see why so many people are drawn to its elements. Hell, I was even considering a career in law enforcement after watching Jodie Foster’s excellent portrayal of Starling. A tale of murder is as old as time, if I am allowed to be serious for a moment. It’s an act that most of us can never fathom and thankfully, never have any contact with. And so we are drawn to it. If you are going to write a book about a serial killer, which will later be an Oscar winning movie, might as well make it as gruesome and terrifying as possible, am I right? Give the people what they want. It reminds me of my brief job in high school, working at the public library in my tiny rural town. I used to love the Saturday shifts because it was so quiet and because the patrons that did come in were easy to check out. Most of the time I got two kinds of people on those days: The older women who came in with their paper bags full of trashy romance novels and the older men who came in with their paper bags full of trashy true crime novels. The limit for checking out those kinds of books was like 25 and I remember being so impressed by how quickly these people could get through so many of them in a week. I finally got up the nerve to ask an old man one day and he simply chuckled and responded that he never read the whole book, just ‘the good parts’.

Hannibal Lecter’s character is satisfyingly complex. I spent the entire movie being repulsed by him, only to then find myself rooting for him, and then being repulsed by the fact that I was rooting for him. Like for example, when he agreed to help the investigation. He was flown to another facility, only to then insult and offend the woman who’s daughter had been kidnapped by Buffalo Bill. I found myself laughing at the awfulness of the situation and the fact that Lecter was just being himself. In looking at trivia for ‘The Silence of the Lambs’, I was amazed to find out that Anthony Hopkin’s total screen time for the movie was a mere 16 minutes and yet most people who have never seen the movie know who Hannibal Lector is and may even be able to quote some lines.

In the end, this movie accomplishes what it came to do- it was terrifying. The most unsettling scene for me was when Lecter has escaped. It’s a complex plan, but at one point the police officers are in the elevator, riding with another officer that they believe has had his face eaten. All of a sudden, drops of blood start materializing on the man’s white bed sheet. I knew what was going to happen and yet I was still completely horrified. There is nothing better than a movie that delivers a satisfying shock like that.

Final review: 5/5. Even without Lecter, this is one of the scariest films I have seen. It’s not one that gave me nightmares, but it was deeply unsettling and I think that’s the worst kind of scary.

One response to “#45- The Silence of the Lambs”