Quick recap:  As if an murdering an entire crew wasn’t lesson enough, Ripley goes back to battle even more aliens. Sure, she thought it was just a consultant job, but some part of her mind had to realize that this wasn’t going to end well. Jones the cat thankfully makes the smart decision to stay home. 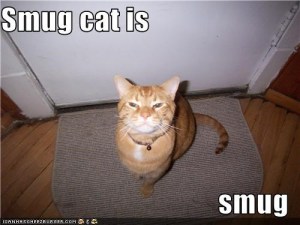 Fun fact: The alien nest set was kept intact after filming and was later used as the Axis Chemicals set for Batman.

My thoughts: Let’s just get this out of the way: I hate Bill Paxton. Hate him. With a fiery passion. I don’t really have a reason for doing so, but he just looks like the kind of guy you would walk up to on a street and punch in the face. He does nothing to help himself look favorable in this movie, except for finally dying. I just really hate that guy. Moving on.

I’m proud of myself for not punching the computer.

The book I am using to choose what movies to watch, 1001 Movies to See Before you Die, listed Aliens as a horror film and so I watched it. If I had watched this movie at any other time of the year I probably would’ve enjoyed it more, but this is definitely not horror. The aliens were scary, sure, but it wasn’t something to keep me up at night. To me, a good horror film is one that a group of girls would choose to watch at a sleepover and then after the movie, make a pact to never mention what they saw again.  Aliens had way more action and suspense than what I am looking for.

One thing that bothered me about the movie is that all the quiet, mounting terror is gone. The director tried to recreate the emotion as the marines discovered the alien nest, but there was just so much going on with the people in webs and other horrors, that I immediately knew everything would end badly. The gunfire and torch blowing was also a disappointment. I guess it was cool that the alien spewed acid when it had been hit,but I was hoping bullets and fire wouldn’t bring them down so easily. In the end, they were rather easy to exterminate.

A couple more things I found annoying: 1) adding in an adorable little girl for Ripley to mother instead of just using the cat again and 2) except for a brief scene at the beginning, no one mentions that Ripley is like, 70, now. It’s bothered me way more than it should have.

Final review: 3/5. I expected horror and it did not deliver. Bill Paxton, you’re lucky I gave it any points at all.