Quick recap: This is the one with the shower scene. 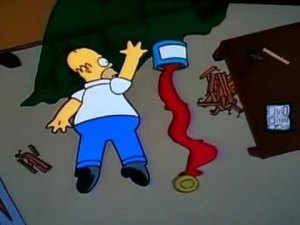 Fun (?) fact: Alfred Hitchcock tested how scary Mother’s corpse was by placing it in actress Janet Leigh’s dressing room and then hearing how loud she screamed. 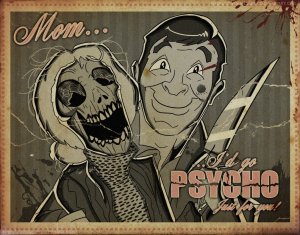 My thoughts: If I had to choose one movie that I am most ashamed to have never seen, it would be Psycho. It is one of those movies I know the entire plot and even some quotes, but until last night had never sat down to watch it. I think the two things that surprised me most were 1) Marion dying in the middle of the film (for some reason, I always thought it was at the beginning) and 2) how attracted I was to Norman Bates. I’m sure the latter will be dissected in future therapy sessions, but for now, I’m sure I wasn’t the only one with these thoughts.

In thinking further about my thoughts before and after the movie, the character of Marion confounded me more than anything else. I’m not sure what I had pictured her character would be-maybe just an unlucky woman who shows up at the motel, instead of what she turned out to be: A Woman of Ill Repute. Which is my favorite kind of woman, although the statistics aren’t that favorable for such a person surviving in a horror film. I think I actually said out loud, ‘she’s dead!’ when she stuffed the $40,000 into her purse. And as for that Infamous Shower Scene, I was ultimately underwhelmed. I suppose I have been desensitized to such violent scenes thanks to modern films and the news, but still, I was at least expecting a bloodier scene. Instead, the murder scene looked more like that time back in college when I was stupid enough to walk barefoot outside and then step on a shard of glass. I’m sure audiences of the 60s would’ve practically fainted if they had seen my dorm room that night. Marion also doesn’t do any good fighting back. She just screams and lets this guy stab her repeatedly. She is kind enough to turn around several times, though, and give Bates even more stabbing opportunities. What a gal.

The most legitimately scary part of the film was that Bates had kept his mother as a corpse. The corpse itself was also creepy, although it also reminded me of a dried apple. If the film had ended with Bates being caught, I would’ve been satisfied. After all, I mostly believe that evil needs no further explanation. I think the audience already assumed that Bates was dressing up as his mother and murdering people, so why spell it out further? Then again, this was the same audience who, even though this was a black and white movie, fervently believed they had seen red blood during the shower scene. And also, there were faintings during the showing of the film. As a side note, was fainting just a fashionable thing to do back then?Was it a way to woo a suitor? In either case, I’m glad we as a society have mostly grown up in that respect.

Maybe this should be a new category for my blog: Things that shouldn’t bother Mary, but they do. It really annoyed me that Hitchcock tried to pass off Norman Bates talking as his mother when it obviously wasn’t. I know he didn’t want to spoil the surprise, damn him, so he recorded women doing the voice instead of Anthony Perkins. But it also sort of ruined the explanation for me, that he was a schizophrenic who had become his mother, because obviously he didn’t inherit her vocal cords.

Final review: 3/5. I won’t say I was disappointed in the film, because it is very well made and Hitchcock is the master of suspense. But it also didn’t quite live up to the hype.

Up next: Woman in the Dunes