Quick recap: A schoolteacher explores the dunes, looking for a rare insect. Realizing he has missed his bus for the night, some villagers offer to help find him a place to sleep. They send him down into a dune with a widow, whose job is to shovel sand for a company. The next morning, the schoolteacher realizes he is trapped. With no way out, he begins to bond with the woman and eventually they fall in love. 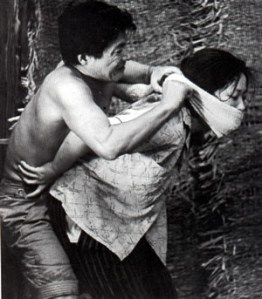 Fun(?) Fact: Quicksand isn’t really all that deadly. Most of the time, it runs just a few feet deep and if you make slow movements, you’ll end up floating to the top and be just fine. I don’t know why, but I always assumed quicksand would be an obstacle in my life at some point and now I’m a little disappointed that it wasn’t the enemy I feared. 😦

bonus fun fact! Apparently there is a fetish for people getting stuck in quicksand. Thanks, Google images!

My thoughts:  When people gush to me about their love of foreign films, what they usually mean is Amélie. Which is fine, and I totally get it because it is a sweet movie, after all. But then I have the experience of watching an unexpected foreign film and I wonder why it isn’t getting the same recognition as all the others we ‘love’. Woman in the Dunes is a weird movie, but not so weird that it couldn’t be embraced by all the foreign film aficionados. In fact, if I had to come up with a tagline for this movie, it would be, ‘It’s not El Topo‘. Clear and concise, just the way it should be.

One of the thoughts that struck me throughout the movie was that I could never get a handle on what genre I was actually watching. This was the first time I chose to forgo research before sitting down to watch something and I must say that it increased my affection for the movie just a little bit more because everything is unexpected. The beginning of Woman in the Dunes would make for great horror film fodder: A young man, unaware of his situation, is lured into the dunes where there is no escape. The sand almost becomes a monster, a living thing. It is its own life force. And there is no escaping it. In fact, the widow must shovel daily, not just because it is her job, but also because if she didn’t the sand would bury her house within a couple of days, with her along with it. But it was also horror as the man realized he was just as trapped as his insects were, after catching them. This is his life now.

At some point, the mood changed and the plot centered more on the romance than the Sisyphus lifestyle. Earlier the sand had frightened me, but now it was being used for sexual tension. One of the aspects of living in a dune is that water is not readily available and when it is, it must be rationed. Therefore, when bath day rolls around, it is a big deal. The scenes with the schoolteacher and widow bathing each other were pretty hot and made me wonder if I had a future in writing sand dune related erotic novels. But then I also thought of a certain scene in the desert from El Topo, and the thought was gone. I guess it makes sense that love would blossom, seeing as literally the only other activity is shoveling sand.

And then finally, after an escape attempt where the schoolteacher falls into quicksand, he is resigned to his fate. One day, he stumbles across an idea to pump water from underground so that it will be available at all times. When his lover is taken away due to an ectopic pregnancy, he even has a chance to escape. Instead of doing so, the schoolteacher climbs out of the dune to look at the ocean, and then puts himself right back where he was so that he can continue his project. It was a very depressing ending, although I suppose there are several ways to take it. My opinion is that there are aspects of life that seem like you may be trapped, and you very well might be, but there is always something interesting that you can throw yourself into and focus on.

Final review: 3/5. Very interesting concept, but there were some slow moving parts and it seemed like there was one disaster after another, which lost my interest a few times.

Up next: I actually haven’t a clue. I’m open to suggestions!