Quick recap:  Romeo and Juliet, but with more dancing 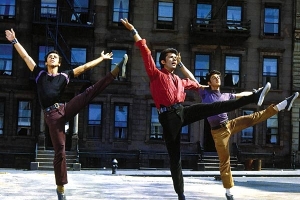 Fun (?) fact: Natalie Wood, who played Maria, was led to believe her voice would be used for at least some of the songs in the film. Instead, the producers went with Marnie Nixon and kept the truth from Wood. Nixon was not paid any direct royalties from the film or credited.

My thoughts: My non-existent attorney has requested that, in an effort to retain what little integrity I have left since watching The Tin Drum,  disclose my disdain for Romeo and Juliet. Sure, I could blame it on my cynical nature of love or the fact that I find Shakespeare overrated or because it’s the one play everyone names as a favorite because they know no others. But mostly, I just think two 13 year olds getting married and then killing themselves is kind of crazy.

Plot aside, I really enjoyed the dancing and orchestral arrangement. It was kind of hard to buy into rival gangs dancing it out, but I eventually got into it. Everyone was flawless in their moves, of course. My favorite number was probably the Quintet and my least favorite was ‘I Feel Pretty’. In general, the lyrics left a lot to be desired, but that’s not something I can fault the movie. Or actually, the lyrics are very insightful and romantic, until I remembered that Maria and Tony had only met a few hours ago. Maybe it is my cynical nature after all.

The scenes where the gangs were together talking about the rumble and the rumble itself were exciting and made me desperately want to see a live show. The scenes between Tony and Maria bored me to tears and I felt like the pacing was entirely too slow for much of the film. They seemed genuinely in love though, so I’ll give them that. The death scene (Come on, do I really need a spoiler alert for this?) was moving and gave me pause as to whether I hated Romeo and Juliet as much as I thought I did.

I think that, as a musical, West Side Story holds up rather well. The depiction of Puerto Ricans, though…….that was a little embarrassing. The accents were awful, like, in doing research for this movie, the actors were required to sit through hours of I Love Lucy reruns and try to imitate Desi Arnez (who was Cuban, but still).

Final review: 3/5, almost a 4. I’m very curious about the live show and how it stacks up against the film. Or, the other way around, since the Broadway musical came first.

Up next: I had a last minute idea to only watch Oscar winners this month, but seeing as how there are only 4 on Netflix Instant, I’ll supplement with my regular list. Terms of Endearment is next.