Quick recap: Two warriors go in search of a stolen sword, only to find out the skilled master they pursued is really a nobleman’s daughter who totes doesn’t want an arranged marriage. Her parents are so uncool, probably not allowing her to get on Snapchat or Instagram. She was right to pursue a life of crime, in my opinion. 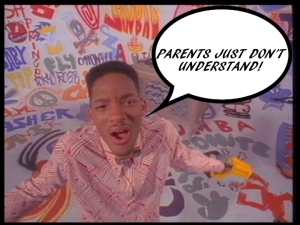 Fun (?) fact: ‘Crouching tiger, hidden dragon’ is a Chinese phrase, basically meaning to hide your strength from others. I’ll file this phrase away to remember the next time I become entangled in a duel.

My thoughts: I vaguely remember watching Crouching Tiger, Hidden Dragon when it was in theaters .  This occurred during my sophomore year of high school, when I went out of town to an academic meet. The truth is, everyone else was old enough to watch the new Morgan Freeman film, Along Came a Spider, and I was stuck watching something ‘cultural’ and ‘sophisticated’. So that explains why I remember the experience and not much of the movie itself, because all I really wanted was a good murder mystery.

Watching the movie again as an adult was much more satisfying, I’m glad to say. 15 year old me was much more focused on the subtitles and not so much the detail, and so I missed out on how beautiful the film is. It’s one of the reasons I enjoyed Brokeback Mountain so much- because the scenery and setting is as vital to the story as the characters and plot. Several points in the movie I had to remind myself that this was shot in modern times and I wasn’t actually watching footage from ancient China. After the movie ended I found myself with a sudden urge to visit China and see all the places Ang Lee showcased.

One of the most surprising parts of the film was the theme of strong women. So much so that in the years since watching Crouching Tiger, Hidden Dragon, I had completely forgotten that there was any romance. The young girl, Jen , is the secret warrior and far more advanced than most adults who have been studying this form of martial arts their entire life. The argument she has about not wanting to marry comes partly from her love of a another man, but also because she recognizes that marriage will end most freedoms she currently enjoys. When her former love, Lo, comes back and tries to take her away, she refuses. It isn’t until the end of the movie that she accepts her feelings and goes to him. The other female character, Yu Shu Lien, is in the same boat. She has strong feelings for Mu Bai, a famed warrior, but has never mentioned anything because kicking ass for a living is kind of fun. So although romance is involved, it is not a driving force in the movie. Also worth mentioning, the main enemy,Jade Star, is also a woman.

The one part of the movie that didn’t work for me were the scenes that involved flying. I get the idea that fighting is really a dance and when the characters were in combat with one another, I was interested. But the scenes where the warrior flew over buildings in a single leap or ran up the wall felt sort of silly. It was easy to see that everyone had been hooked up to wires which had been edited out, instead of trying to convey that this was a magical part of the story. I enjoyed the fight scene in the trees because even though they were in battle, it was peaceful. 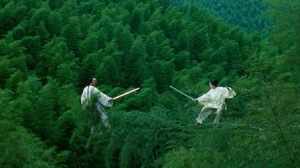 Final review: 5/5. The soundtrack was as beautiful as the rest of the movie. I would definitely watch this one again

Up next: Seven Samurai