Quick recap: A man is married to two women at the same time and of course, neither of them know of the other. Do zany hijinks ensue??? No.

Fun (?) fact: This movie was rather devoid of ‘fun’ facts, unless you count Jack Benny’s real house being in the movie. I certainly don’t and I’m silently judging those of you that do. 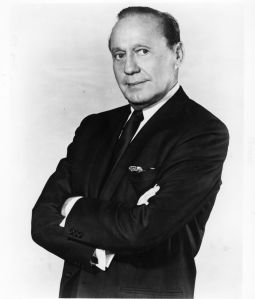 Jack Benny is suspicious of the fact being labeled ‘fun’

My thoughts: With a title as straightforward as this one, I was expecting something a little more lighthearted, like ‘Oh, that bigamist! Will he ever learn?’ And then one of the women turns to the camera and does a cute shrug of her shoulders and everyone laughs. What The Bigamist ended up being was almost opposite, bordering on melodrama. The story starts with a couple-Harry and Eve Graham- trying to adopt a child since Eve can’t conceive on her own. Mr. Jordan, the adoption coordinator, has the two sign a form consenting to a full background check. Eve happily signs hers while you can almost see the sweat poring out of Harry. Two minutes into the movie and I already know who The Bigamist is! I’m grateful to watch a film that gets right to the point, although I wonder how it would’ve played to keep it a secret like trying to figure out who the murderer is. Is it the postman? Is it the waiter? Is it the guy with shifty eyes, sweat poring out of every orifice?

I was a little surprised by the sensitivity shown to all characters involved, especially considering that no one is really painted as the bad guy. Eve is unable to conceive a child of her own and tries to make up for it by being the perfect wife and business partner to Harry. Harry is the overworked husband, commuting constantly from San Francisco to Los Angeles. Feeling very lonely, he strikes up a relationship with another woman that eventually leads to her getting knocked up. As bad as that sounds, once Harry realizes that Phyllis is pregnant (which would have been near impossible for me to understand. The word ‘pregnancy’ is never mentioned. Instead we see Phyllis lying in bed, her stomach completely hidden by a comforter) he asks her to marry him to make things right. Phyllis is also a victim in the situation. She spends the entire movie trying to prove that she doesn’t need anyone and then when she finally admits to needing Harry, he gets arrested for bigamy. Seeing as how this movie was made in the early 50s, I was expecting a lot more woman blaming, but in the end, Harry owned up to everything.

As for the bigamy thing, I’m a little conflicted about who it really hurt. Harry spends most of the movie moaning about how hard it was to keep the secret of two families, but he never really goes into what it’s like to have two wives. Both women seem happy with the situation and both are well cared for. But bigamy is against the law and it was only a matter of time before everything blew up. Is bigamy still a thing? I would imagine that it would be much harder to pull something off these days, what with the Twitters, Facebooks and digital records. The final courtroom scene I felt did a great job summarizing the issue. If Harry had just kept Phyllis as a mistress, no one would’ve really cared. But the fact that he tried to make an ‘honest woman’ out of her is what did him in. It seemed like both women really loved him, but how could they continue?

Dan Savage would probably say DTMFA, or maybe everyone should just go poly!

FInal review: 4/5. Dramatic, but not overly so.