Quick recap: A coming of age story set in France during the Algerian war (another war movie because of course), four teenagers in boarding school explore their sexuality and also explore who they are becoming.

also lots of nudity. Did I mention it was a French film?

Fun (?) fact: The Algerian War was seen as taboo by the French for many years. Although the war ended in 1962, it wasn’t until 1999 that French officials decided to start referring to it as the Algerian War instead of The Thing That Happened That One Time.

My thoughts: I’m starting to understand that the term ‘coming of age’ in American culture is much different than that in French culture. In America, a coming of age film might involve an awkward teenage girl or boy with a crush and usually some harsh reality like death. In France, coming of age could mean anything from exploring homosexual feelings to incest. I’m grateful that compared to what I learned in Murmur of the Heart, Wild Reeds is more of a film that I can identify with.

Usually in an American teenage film, there are the stereotypical roles like Jock, Cheerleader, Misunderstood Artsy Student, Nerd and so on. In Wild Reeds we have the Communist Feminist, the Homosexual, the Algerian Nationalist and the Brooding Son of a Farmer. So, it’s sort of the same thing I suppose. As pretentious as the roles sound, it worked well for the movie. They all had a lot to deal with, and yet that didn’t stop them from the usual teenage desires. I admit to knowing nothing about the Algerian War before watching this movie, otherwise I might have understood the tension and later attraction between Maïté and Henri a little better. It didn’t take away from the heart though.

My favorite character (although all of them interested me) was François. He dated Maïté in the beginning of the film but then started to have feelings towards his friend Serge. His coming to terms with being gay is a great example of character development and his crush on Serge felt incredibly realistic. François was sincere throughout the film and knew what he wanted but as a teenager, didn’t know how to attain it. 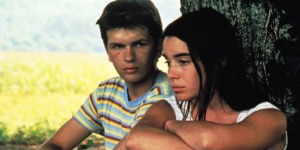 Those French sure know how to brood

Final review:  4/5. Although the movie was French and dealt with a war I knew nothing about, I was still able to identify with the characters and enjoy myself.

Up next: All Quiet on the Western Front