Quick recap: After escaping from a mental asylum, a psychotic killer roams through his hometown searching for more helpless, busty teens to kill.

Fun (?) fact: Apparently everyone knows this but me (Thanks, second rate American education) but Janet Leigh (of Psycho fame) is the mother of Jamie Lee Curtis.

also, I thought Curtis was like 30, but really she’s the only one who was actually a teenager

My thoughts: In a quest to scare myself before the end of the month, what better movie to watch than Halloween? And unlike Jaws, I distinctly remember watching the original back when I was a kid. Actually, I think I watched it several times when I was younger but I don’t remember it scaring me all that much. Back then I had a very sophisticated system where I was able to rank all movies by their scariness, called the ‘It test’. The test consisted of one question: Was I watching the Stephen King movie It? If I was, then the movie was deemed ‘scary’ and if not, ‘not scary’. Like I said, very sophisticated. And although this movie had scary elements, it ultimately failed at scaring me then…….or now.

So first of all, this is the mother of all horror films. Most would argue that that title should be given to Psycho, but what I am referring to is the sort of horror film teenage girls watch at a sleepover and then spend all night staying up and scaring each other even more. The whole plot of the movie revolves around Michael Myers (back then referred to as The Shape) stalking teenage girls and murdering them. He had a town full of potential victims but all he wanted were the busty teens.  Therefore, this is a perfect movie for a 16 year old but for a 30 year old woman, not so much. I’ve been a little sad about getting older but after watching Halloween, I realize that I’m out of the demographic for Michael Myers murdering me. Hooray!

Halloween never really had any moments that surprised me, either. Thanks to the music I knew exactly when The Shape was going to show up. The death scenes themselves were also campy, especially with the fake blood. The scene with the tombstone creeped me out, but that was about it. What ruined it for me was the end when The Shape is stabbed with knitting needles, a wire hanger, shot several times and also fell out of a two story house, only to walk away seemingly unscathed. Leaving it at ‘psychotic killer’ would’ve been frightening enough but to turn it into a supernatural element of evil just made the whole movie seem silly. 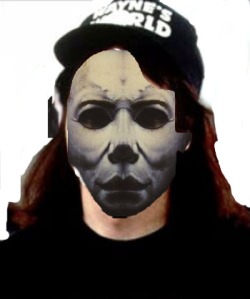