Quick recap: William ‘Steamboat Bill’ Canfield is a-you guessed it- steamboat captain. When he receives word that his son is coming to visit (and whom he hasn’t seen since he was a baby), Steamboat Bill looks forward to having a strong, muscular man such as himself to help with chores on the ship. Instead, he gets this guy:

That stare is going to haunt me for years to come.

Fun (?) fact: One of the most famous scenes in this movie occurs when William Canfield Jr. (played by Buster Keaton) is almost crushed to death by the side of a house. This scene is later recreated for an episode of Arrested Development by none other than the character Buster.

not caused by a loose seal

My thoughts: I have discovered a perk to silent movies: I can watch them when The Kid is awake since I don’t need sound to understand them. Hearing the music coming from my computer, he came over to investigate. He watched for about two minutes before declaring the whole thing, ‘silly’ and then walking away, presumably to torture the cats. An apt, although quite succinct review, if I ever heard one.

I had heard of Buster Keaton before, although I have never seen anything he has been in. I always thought of him as another Charlie Chaplin, mainly because those are the only two silent film stars I can name. I do see similarities, though Chaplin seems much sweeter in his movies. Keaton plays the part of the ‘awkward son’ very well, and I admittedly laughed during the scenes where Bill Sr. tried to change Bill Jr.’s look into something more masculine. On that note, most descriptions of Steamboat Bill Jr. call Keaton a ‘dandy’, which I suppose is an appropriate adjective although one not used very much anymore. Dandy just seems like such a……. ‘dandy’ word. I’m not sure what I would call him, although with the ukelele and beret, ‘hipster’ might not be too far off. 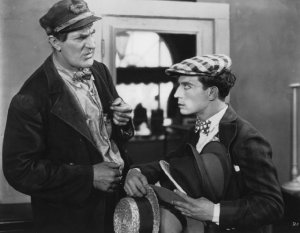 The relationship between father and son lacked the warmth I had come to expect from silent films. Sure, in the end, father learns to accept son, but it was only at the very end and after Jr. had saved Sr.’s life. Jr. only won favor because he finally ‘manned up’. Then again, this is the 1920s we are talking about, so maybe my expectations were too high. Mostly, I thought of another father and son while watching this movie:

That’s right, I like to reference movies I just reviewed

Finally, the typhoon scene is what most people know about this movie, but I just found it…..weird. Maybe it was because it just looked like someone turned on a heavy duty fan on a clear day or maybe it was because houses don’t fall down like that, I don’t know. I didn’t find it very funny and thought it a weak ending to the story.

Final review: 3/5. Not the best, but I’m hoping to enjoy other Keaton films more.

Up next: October (Ten Days that Shook the World)