Quick recap: Marty McFly accidentally travels 30 years into the past where he must help his parents meet before he and his siblings are erased forever. 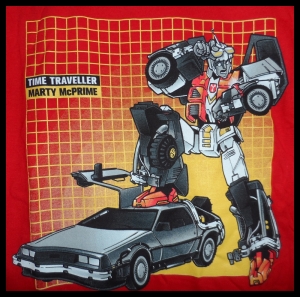 Fun (?) fact:  Thomas F. Wilson, who played Biff, improvised the ‘butthead’ line as well as the ‘make like a tree and get out of here’ line. He also gives out FAQ cards to fans when they ask him about the movie.

What not to do when time traveling

My thoughts: Unlike Jaws, I do have memories of seeing this movie at some point in my adolescence. It wasn’t a favorite then, although I remember being entertained by it. In the years since, not much has changed. Back to the Future is one of those movies I would watch anytime it was on tv or if someone put it on, but it isn’t something I would seek out on my own.

If I had to put my finger on the best part of the movie, I’d go with Michael J. Fox’s performance. Casting did a perfect job choosing him as the lead character. On the surface, he’s a normal teenager with the typical problems of school, having a girlfriend and being embarrassed by his parents. On another level though, he is a very thoughtful kid, befriending an eccentric scientist and then doing everything he can to help him. Getting his parents together was selfish, I suppose, but he really took to heart who his parents were and who they eventually turned into. It’s these layers that made me appreciate the movie so much more than when I originally watched it.

But mostly, Back to the Future is about time travel. The action scenes were good, although the science a little fuzzy. I like that the answer to why this was possible at all was the ‘flux capacitor’ as if that’s all you really need to know. The only issue I have is how easily McFly was able to change events into the future. he mentioned being mayor to Goldie one time, and he latched on to the idea. He played guitar at the end of the movie, where Chuck Berry’s cousin just happened to be, thus creating rock and roll. At least it all turned out for the better, in the end. 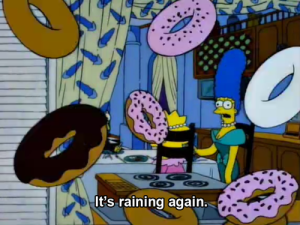 Final review: 4/5. Very enjoyable and also a movie that perfectly captures the 80’s. Oh, does it ever.

Up next: The Player