Quick recap: Emile Zola was a French writer in the 1800’s who wrote several books about the state of his country. He was most famous for an article called ‘J’Accuse’ where he condemned France for wrongfully imprisoning  Alfred Dreyfus for suspected treason.

This movie is chock full of newspaper montages!

*spoiler alert* Zola dies and was maybe murdered. You know how much I hate giving away the endings to films almost 80 years old. 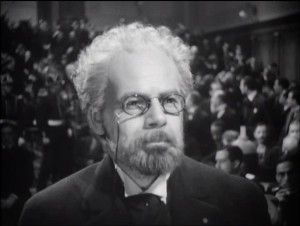 He looks like a more dignified Colonel Sanders. Sorry, had to get that out of my system.

My thoughts: Although I love getting to watch some old favorites like my last film review, there is something satisfying about sitting down to watch a movie that I know nothing about. Before last night I had never heard of the name ‘Emile Zola’ or any of his works. I won’t go so far as to say that I am a fan, but it’s nice to have knowledge about something previously unknown to me.

I thought The Life of Emile Zola was a French film but actually it’s an American one about someone French, which means British accents for some reason. That’s a pretty common thing even now (I’m looking at you Tom Cruise in Valkyrie) but it still annoyed me a tiny bit. Despite this, the acting was superb. Even though this film was made in 1937, it felt like it could’ve easily been made in the 50’s. Paul Muni, who played Zola did a remarkable job, especially during his 6 minute speech in the courtroom at the end of the movie.

Emile Zola waters down actual events into something less complicated, a fact that makes sense given the time but also makes me a little angry. For example, in real life Dreyfus was wrongly accused and convicted partly because he was Jewish. This film came out right in the middle of the rise of Hitler and so movie execs didn’t want to take a stand. So the word ‘Jew’ is seen exactly one time in reference to Dreyfus and never uttered once. Like I said, it makes sense but also diminishes from the story a little.

Final review: 3/5. I really did enjoy this film and stayed interested almost the entire time, considering this was just about a writer’s life.

Up next: Straw Dogs