Quick recap: An account of Hitler’s last days, told from the perspective of his secretary Traudl Junge 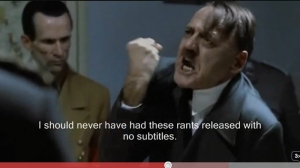 This is where that ‘angry Hitler’ parody comes from

Fun (?) fact: from IMDb: ‘During the war, the majority of the cyanide capsules produced were made in the concentration camps, which made sabotage a real problem. This is one of the reasons why many Germans who committed suicide by cyanide also shot themselves to make sure they would die. This is also the reason why Adolf Hitler‘s beloved dog Blondi was poisoned; he wanted to make sure his batch of cyanide was not fake.’

My thoughts: I know I say it often, but seriously you guys, THIS is the most depressing movie ever. If nothing else, the last 1/2 of the movie is just people killing themselves as well as children and dogs. And it’s all real, which adds another layer of tragedy.

At 166 on the list, Downfall is the most uncomfortable movie I have ever sat through. It started off a little boring, with people calling Hitler crazy (as they were wont to do) because he decided to stay in Berlin, which was close to being occupied by the Russians. World War II history just doesn’t do much for me, I think, because it has been talked about and researched so thoroughly that I feel I know all that I need to know. But at some point, I can’t really pinpoint when, this movie got to me. I think it was one of the scenes with Hitler and Eva Braun or with Traudl Junge, where he seemed almost…..charming. And then with the rest of the SS officers, many of them were seen as almost human, although they were known to have committed some of the worst atrocities in history. I felt intensely guilty having any emotion whatsoever, considering the 6 million Jews that were tortured and killed. But at the same time, it made sense. We would like to paint Hitler and his officers as completely evil because it makes it easier to separate right from wrong, black from white. Reality is much more complicated, unfortunately. Dr. Goebbels and his wife seemed like decently normal people who had a beautiful family, but then they went and poisoned all 6 of the children simply because they didn’t want them to live in a world where the Nazi regime was no longer in power. Eva Braun brought out the softer side of Hitler, if there was one, even though she was just as crazy as he was.

Throughout most of the movie, I felt like I was watching a documentary instead of a bunch of actors recreating scenes. When I was looking up pictures to add to this post (none seemed appropriate), it impressed me how realistic the bunker was compared to the real thing. The casting was also spot on, almost terrifyingly accurate. This made the scenes like the children being poisoned and Hitler and Eva committing suicide all the more difficult to watch.

Most people reach for Schindler’s List when trying to understand all the evil that happened in World War II, but I think Downfall is a necessary companion to show another perspective. My opinion, as well as most of the world’s, will never change about the Nazis or Hitler, but the things I have believed up to this point are no longer as accurate or as simple as they were before.

Up next: The Jazz Singer