Quick recap: Jake LaMotta was a talented boxer in the 1940s and also a huge jerk. 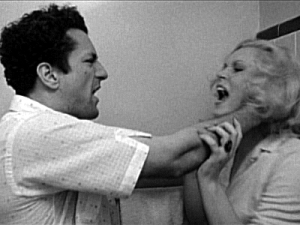 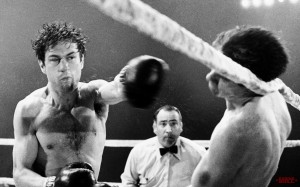 My thoughts: Is it wrong to like a movie simply because it is the ‘anti-movie’ of something else? I didn’t love Rocky because it felt too inspirational and didn’t match up with my belief that boxing is a very violent sport. Raging Bull definitely shows the opposite and cutting all the inspirational crap endeared it to me a bit. I’ve never been a fan of sports movies precisely because they are too sweet and rely heavily on the flawed character to save the day. Jake LaMotta is ALL flawed character (and still alive at 98!) and no real redemption, which made it the perfect ‘anti-Rocky’.

Without a doubt, Raging Bull should be seen for the acting alone. Joe Pesci and Robert De Niro were phenomenal as brothers Joey and Jake LaMotta. I have no idea how accurate the film is, but De Niro’s performance especially made me believe that I was watching the real thing. Most people are impressed by the boxing scenes and how realistic they were (and many did involve real punching), but I was more impressed by how well De Niro was able to show his character’s downfall. The final scene where LaMotta is practicing the monologue from On the Waterfront, many years after giving up boxing was the perfect ending to such a sad movie.

Final review: 5/5. Not my favorite movie, but a masterpiece nonetheless.

Up next: the Umbrellas of Cherbourg