Quick recap: A man finds out that the girl he made out with is really his sister. More family problems arise when he confronts his deadbeat father, hoping to change his ways before it is too late.

Fun (?) fact: All of the Ewok actors quit at one point, in protest of the tough outdoor conditions (being a teddy bear with creepy lips is tough). They eventually returned, all wearing ‘Revenge of the Ewok’ t-shirts. 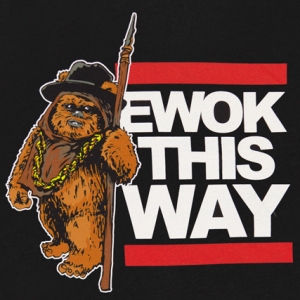 My thoughts: Once again, I’m sort of at a loss as to what to write about the final Star Wars episode this book has (the editors wisely passed on adding in episodes 1-3). I realized while watching Return of the Jedi, that this might be my favorite of the three. I’ve always said it was Empire Strikes Back, because it’s so dark and there are so many important things that happen. This movie, however, is just fun, something that I think gets overlooked when it comes to the franchise as a whole (I’m talking to you guys who bombarded the Toys R Us and bought all the toys before kids could get their hands on them). This is the film that gets me excited for new movies, and it is the one I hoped my son would enjoy most, also.

One of the biggest turn-offs serious fans have are the Ewoks, and I admit that they are pretty silly. At the same time, they also fit in perfectly within the narrative. I never loved them, but I didn’t mind them, either. My six year old LOVES Chewbacca, so he naturally gravitated toward these creatures, and I think having them in the movie made him appreciate what he was watching a little more.

As for a favorite scene or part, it’s a toss up between Jabba the Hutt and the Emperor trying to entice Luke to give in to his anger. Both scenes are a great representation of Luke’s character, and also how much he has matured since he was a whiny kid back in Episode IV. This is the hero that everyone wants, yet his greatest strength is not in himself, but the people (and family) he is surrounded by. I also loved the ending between Anakin and Luke. Yes, Darth Vader was evil, but that wasn’t always the case. In a positive light, it means that there is good inside all of us. In a negative light, it means any of us can head down that path without really realizing what we are doing.

Up next: Zero for Conduct, which If… is based off of