Quick recap: After a horrific accident, a father goes out of his way to try and repair his daughter’s face. It sounds like the sweetest story ever, until it is revealed he is murdering young women and stealing their faces.

there’s a face that’ll keep you up at night 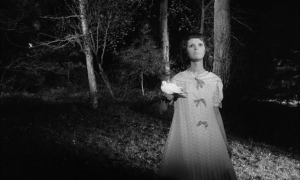 My thoughts: Many of the horror films I’ve watched from other countries do a nice job of building up suspense long after the movie is over. Except for Funny Games, which traumatized me from the very beginning. Eyes Without a Face is no exception. I thought it slow moving while I watched, but there were enough creepy scenes to keep me somewhat occupied. After the movie was over, however, I couldn’t get the image of the girl out of my head and it has stuck with me since then.

Unsettling is the best word I could use to describe the movie. There was never anything downright scary, but instead several scenes that unsettled me. The surgery scene, for example, as the doctor removed the girl’s face to transplant it on to his daughter’s. It was gruesome, but not terrifying. And the final scene when the doctor gets what’s coming to him was also gross but not scary. All the scenes in between, though, especially anything to do with the main character and her Mask of Gloom bothered me. She was very sweet and didn’t ask for any of this, but why did she have to look so creepy with the long, flowing night gowns? And whoever decided that the mask was an improvement over her disfigured face was out of their mind.

As has been the unofficial theme of HorrorFest this year, I had trouble trying to figure out exactly what I was supposed to fear. The doctor was evil, murdering pretty girls just for their faces, but that didn’t particularly scare me. Or maybe it was the girl herself, who, as I just described, creeped me out, but only because of the mask,not because of who she was. I’m appreciative that my knowledge of the horror genre has increased, but it also makes me a little sad that it’s harder to find good movies that just scare me, without any rhyme or reason. Maybe one will pop up here next year, because this year has been a bit of a dud.

Final review: 3/5. The girl wasn’t enough for a higher rating, although the movie itself wasn’t bad overall

Up next: the last film of HorrorFest!