Quick recap: A director uses the audition process to find an actor for his film as well as a wife. What he gets instead is a big ball of crazy. 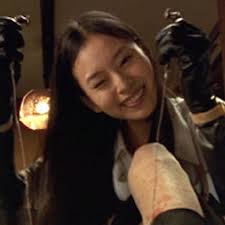 Crazy, yes, but also really talented at torture, so points for that

Fun(?) fact: That was totally actress Eihi Shiina’s (Asami’s) throw up given to the prisoner. IMDb says she’s a method actress but I’m going to double down on ‘big ball of crazy’.

My thoughts: As with every Horrorfest, my goal is always to find the movie that scares me most. Being an adult, it’s hard to latch on to anything creepy these days. I’m more likely to freak out about whether I paid a bill on time than if there is a ghost haunting my house. Then again, the other day I walked into my bedroom to find my cat meowing at the wall and it scared me so much I just walked back downstairs. So, where does Audition fall on Mary’s Spectrum of Horrors? I’d say it’s scarier than a wind turbine (seriously, those things are so unnerving) but not as scary as my child silently walking down the stairs with an astronaut helmet on at 6 in the morning.

There were definitely parts of Audition that stuck with me and I thought the film itself was gorgeous, in that ‘someone’s about to get murdered’ way, but I can’t say it was enough to keep my interest for long. I was really surprised by how normal everything seemed in the beginning and I admit to be lulled into a false since of security. But then unnerving information started coming to the surface and soon it was just all out crazy. I don’t want to reveal much because I think that’s the film’s best quality: surprise.

Two elements of the film keep me from giving it a higher rating- the over the top torture, and the explanation as to why the woman turned out the way she did. For some people, these elements are what make the movie so fascinating and scary but personally, it detracted from what I was looking for.

Final review:3/5. Not a strong start to Horrorfest but there are several days left in the month! The search continues.