Quick recap: After losing his daughter in a drowning accident, John starts to have visions which may or may not be trying to warn him of danger.

A big fat nope that scene was

Fun (?) fact: Julie Christie ( who plays Laura) and Donald Sutherland ( who plays John), had never met before shooting the film and the first scene they did was the infamous sex scene. 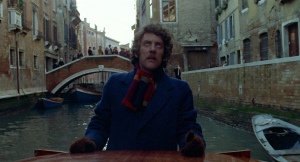 My thoughts: Although my primary goal in Horrorfest is to work my way through the list, my secondary goal is find something terrifying. Save for some recent horror films ( shout out to It for still giving me nightmares in my 3os), I haven’t found much in this book that really got to me. Don’t Look Now was supposed to be that film. Real life situations scare me (versus monster movies) but those involving dead children go straight to the top of my list.

I want to go ahead and mention that there is a twist of sorts at some point in the movie and though the film is over 40 years old, I don’t want to spoil it for anyone who might want to watch it. I knew what was going to happen thanks to gifs I’ve seen and I think that took away from the horror a bit. There were still a few creepy scenes though, that got me going. I posted one above that occurred within the first 10 minutes of the film and I thought was a great way to portray the death. There are several parts of the film that are like this: utterly creepy without overdoing it. Many refer to Don’t Look Now as ‘gothic horror’ and I tend to agree with the label. There aren’t any things that jump out or do anything horrifying. It’s more of a sense of dread throughout the movie and a reticence to find what might happen next.

Overall, though, this movie just didn’t do much for me. Maybe it was the slow moving plot, the droning on and on about the same things, the weird sex scene, or maybe it was just that I couldn’t keep this gif of Donald Sutherland out of my head:

Whatever it is that did it, I’m disappointed. After doing some research I have a better appreciation for what the film did and I especially love all the symbolism. The fact that so many well known people love this movie also speaks to its greatness, but it just wasn’t my cup of tea.

Up next: one more movie left in Horrorfest!