Quick recap: A group of former college friends reunite at a funeral for Alex, a friend who committed suicide . 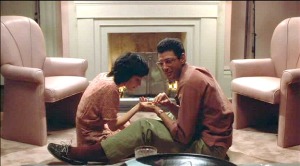 Fun (?) fact: Kevin Costner was cast as dead guy Alex and he originally filmed some flashback scenes. Most of it was cut  by the time the movie was released So all that’s left is a few seconds of Alex’s corpse being dressed for the funeral.

My initial lack of enthusiasm for The Big Chill stemmed from the large ensemble cast. A large group of characters who shared a long history meant that I would have to sit through each backstory and ‘connect’ with each person. Thankfully, that’s not what happened. There’s never an explanation how everyone met each other but there are a few clues about the various relationships. One thing I disliked was how the women were welcomed into the group but their relationship to the men was mostly a previous or current romantic one. The men were successful- a businessman about to go big, a journalist, a movie star and a radio psychologist. But the women mostly just talked about various relationships and kids and subpar husbands. Seeing as how I never really had a huge group of friends I hung out with in college, maybe that’s just how it goes. And maybe there wasn’t enough time to flesh out all the characters. Either way it just felt like the women got the short end of the stick in this group of friends.

Despite the premise of friends reuniting at a funeral, The Big Chill isn’t as sentimental as it could’ve been and I appreciate that. There’s the usual mix of montages and heartfelt discussions you find in these kinds of movies but it never goes full on schmaltzy. Alex’s suicide weaves in and out of conversations and it all felt so genuine, as if these were a real group of friends. In the end, as everyone began to depart it was nice to think of them all staying in touch after such an emotional meeting but there’s a hint that things might’ve just gone back to the way they were, much like real life. I prefer that ending over a definite answer that everyone’s life had changed.

Up next: The Man Who Shot Liberty Valance