Quick recap: Aspiring comedian Rupert Pupkin wants nothing more in the world than to be on the Jerry Langford Show and he’ll do anything to secure his spot.

Fun (?) fact: Robert De Niro, a method actor, said anti-Semitic remarks to Jerry Lewis to get a rise out of him during the scene when he crashes his weekend home. It worked. 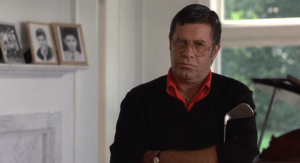 My thoughts: This movie was a total surprise- from the time I learned it was directed by Martin Scorsese to my first glimpses of Robert De Niro to the ridiculous ending. And I loved it all, even if the embarrassing moments made me want to hide forever.

With a name like The King of Comedy, I expected something hokey and I was a little disappointed that Scorsese would go for such cheap comedy. But from the very first scene as Jerry Langford tries to exit his building through a mob of rabid fans, I knew I was in for something dark. De Niro is perfect as Rupert Pupkin. I found myself constantly wavering between feeling sorry for him and supremely annoyed. The same with Sandra Bernhard as Masha, although she made me cringe much more than have empathy for her. Rupert and Masha are in this microcosm of fans who are obsessed with a celebrity and they feed off of each other. Rupert, as mentioned above, is an aspiring comedian but about the only practice he does is make tapes of himself pretending to be on the Jerry Langford Show. He is so determined to be there that this becomes his focus, instead of actually honing his craft. And Masha is in love with Jerry and is convinced they deserve to be together.

Rupert’s fantasies of a relationship with Jerry Langford are confusing because they blend in so well with the actual plot. The first one is of Langford begging him to take over the show because he needs a break for a few weeks. It’s very obvious this is a figment of his imagination but the end of the movie has Rupert actually becoming a star because he kidnapped Langford and I can’t tell whether this really happened or not. There’s a point about how obsessive the public can be with celebrities and how fleeting love can be, so it would make sense Rupert lives in infamy just as much as it makes sense he is completely forgotten. Not knowing somehow makes this movie even darker and more sad. And speaking of which, Rupert’s set on tv is so self-deprecating that it physically hurt to watch but the audience loved it. Or did they? I kind of love that I don’t know for sure.

Up next: Atlantic City