Quick recap: A woman’s husband and child are killed in a car accident and she must learn how to navigate this new life without them. 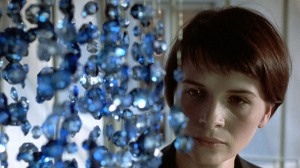 yes, there was actually a lot of the color blue in the movie

Fun (?) fact: The scene where Julie scraped her knuckles along a stone wall was real. Actress Juliette Binoche didn’t think a prosthetic hand looked real enough so she went full badass and did it herself. 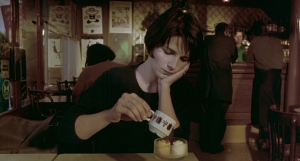 I know she’s in a deep depression, but ordering coffee and then pouring it over ice cream is PERFECT

My thoughts: I knew this movie would be sad but I didn’t expect it to cut so deep. It’s a sadness that settled into me and took awhile to shake off after the credits were over. But Blue is also a beautiful film and actually hopeful in the end, even if only marginally so.

It is impossible to do this movie justice because the visuals are so rich. It’s not a dialogue-heavy film anyway and it doesn’t need to be. I’ve never been through grief like the main character but watching her try to continue on seemed so familiar. There aren’t any scenes of her completely losing it like you would expect. Instead, there’s a pushing down of emotions that somehow make it all the more depressing to watch, like her swimming in the pool and crying.

The score plays a huge part in this film, if not the most important part. Julie’s late husband was a composer, although it turns out to have been her writing most pieces. He also had a mistress who shows up pregnant towards the end of the movie. It feels weird saying I disagree with Julie’s decision to house the mistress and finish the symphony because this is such a personal story. It’s like it actually happened, as if I watched a woman’s grief in real time. And when someone has lost as much as Julie, what else is there to say or do?

Up next: The Right Stuff