Quick recap: This is a Civil War era film, directed by the great DW Griffith. There are two plot lines involving the North and the South and how each is effected. The first part of the movie (it was originally two parts) is pre Civil War up to the end and the second part is all about the Reconstruction. In the second part of the film, African-Americans are given rights and wreak havoc on everything and everybody. The KKK rises up to protect all those innocent white people and everything is ok.

Fun (?) fact: The KKK used this movie as a recruiting tool. Of course they did.

My thoughts: So the first part was really no different than Gone With the Wind, with all its epic-ness. Nothing I haven’t seen before but I suppose for its time, I can see why people loved it. I sat through this part thinking, ‘This isn’t so controversial!” and then I got worried that the internet has desensitized me too much. And THAT’S when the second part started. Wow. It’s like I can almost imagine Griffith had a checklist of everything offensive to African- Americans and laughed maniacally as he put it into the film. 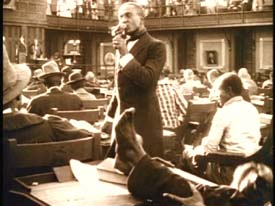 Besides being offensive, this film did not interest me at all. I love historical movies as you shall see in later posts, but nothing kept me glued to the screen.

Final review: 2 out of 5. Not going to recommend this one, unless you want to watch it for its value to film. I watched the movie on archive.org.

Where I watched it: http://www.archive.org