quick recap: This is a flashback story about a man named Francis who goes through a terrifying experience. He goes with his friend to a fair and meets. Dr. Caligari who has a cabinet. Thus the title. Inside the cabinet is a somnambulist (sleepwalker) who can see the future, according to Caligari. Francis’s friend asks the sleepwalker, Cesare, when he will die and is told he will be dead by dawn. This comes true later on as well as a few other strange murders. It is revealed that Cesare is doing the killing, under the guide of Caligari. Francis heads to the local insane asylum to figure out some more information and finds out that Caligari is the director. It is also revealed that he is obsessed with a monk named Caligari who controlled a somnambulist who also murdered. After it is revealed that Cesare is dead, the doctor goes insane and is committed to his own asylum. The end? NO! There is a twist!

Fun (?) fact: This movie introduced the idea of a twist ending in cinema.

My thoughts: The very first thing I noticed about this movie is the set. It feels more like a nightmarish play than a movie. 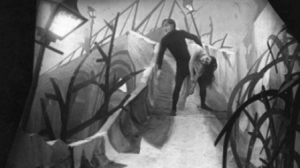 In many ways, I felt like everyone was trying too hard to be shocking and scary. The makeup was over the top as well as the expressions. On the other hand, it definitely set the mood. If you eliminate all the dramatic elements, the story itself is akin to a Twilight Zone episode. 92 YEAR OLD SPOILER ALERT: turns out, Francis, Cesare, and his fiancee are all residents at the local asylum and ‘Caligari’ is their doctor. It was just a story! I’m a sucker for twist endings, so this gave the movie some points.

Final review: 3 out of 5. The movie is really short so it doesn’t hurt to check it out. It’s interesting to see the birth of a now common cinematic element, back when no one saw the ending coming. I’m talking to you, Shyamalan.

Where I watched it: Netflix instant