Quick recap: HA! I’m not even going to try. So, in its place I present to you kittens doing the Time Warp: 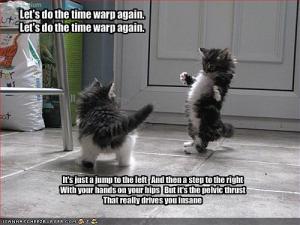 Fun (?) Fact:  Naturally, there was a ton of material to choose from but my favorite was that apparently Princess Diana was a huge fan of The Rocky Horror Picture Show. Tim Curry mentioned the story on NPR, saying that when he met the Princess and Prince Charles, she said that the movie, ‘quite completed my education.’

My Thoughts: This is a movie I have always wanted to love, yet have never really had the time to sit and be drawn in. I remember watching RHPS when I was in high school. It was late at night, and on a cable channel with commercials and the good stuff cut out. I was ‘meh’ about the movie at the time. Fast forward to college and my university was showing the movie for Halloween. I considered going but then backed out because I’m not a fan of crowd participation. All this is to say that RHPS is best viewed when the viewer is ready to enjoy it. For someone who is unsure about the whole thing, it’s best to just let it go and try another time. I think that most people could enjoy this film  but they have to have an open mind. So, I thought it might be best to create a tip sheet to help those who are RHPSvirgins.

What to Expect When You are Expecting a Sweet Transvestite from Transylvania:

1. The movie isn’t going to make a lick of sense. Don’t even try. It’s supposed to be an homage to early science fiction films but with singing and cross dressing. It’s best to just let your mind go.

3. Tim Curry is perfection. If you are in your 20s or early 30s, you most likely only know Tim Curry from the Stephen King miniseries, It. And you probably have an understandable fear of clowns. I get it, believe me, I do. But don’t let your childhood fears keep you from appreciating the genius of Tim Curry. He IS this movie. Without him, RHPS wouldn’t be a blip on a radar.

4. Most of the songs are catchy. I especially love ‘Dammit, Janet’ because of reasons.

5. It’s kind of hot? Now, up to last night I’d have to say that seeing a man in fishnet stockings, a corset, and leather did nothing for me. But then I watched as Tim Curry clicked his heels coming down the elevator and then he sang and I.LOVED IT. There is just something about that outfit mixed with the deep british voice that I just went for. It’s ok to dig it, too. One of the movie’s themes ( I think, refer to #1) is about exploring sexuality. Everything is so out there and different that you might find yourself surprised by what turns you on. 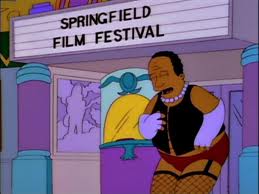 I have a friend who dressed up as Frank N.Furter and it is WONDERFUL but I figured it might be a little weird to steal his picture and put it here. So enjoy a Simpsons picture!

Final Review: 4/5. Is the plot good? NO. Did I enjoy all of the musical numbers? NO. Am I going to watch it again and throw buttered toast at my tv screen? YES. 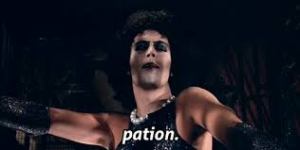