Quick Recap: Dante Hicks works at a convenience store, which seems awful enough. The story starts with him being called in to work after closing the store the night before. Thus begins the day from hell. His buddy Randal, who works next door at the video place, frequents the shop throughout the day to keep company and sometimes make things worse. There are also a wide variety of customers to add to the hellscape that is the Quick Stop. I mean, the movie is called ‘Clerks’. It’s about Clerks. I don’t know what you were expecting. 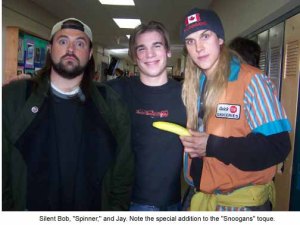 Kevin Smith is ok in my book because he understands the greatness of Degrassi.

Fun (?) Fact: Knowing how this movie was produced made me appreciate it a little more. For example, the movie is filmed in the same convenience store Smith worked at, and he was still working there throughout the movie’s production. That’s rather impressive.

My thoughts: I’ve always seen this movie as more of a ‘guys movie’ rather than actual good cinema. Maybe it’s because almost every guy I have dated has attempted to get me to understand how profound this movie was. In fact, the first time I watched ‘Clerks’ was with a boy I had a major crush on in high school. Admittedly, I paid less attention to the movie and more to my feelings towards said boy. Moving on. At its surface, this is very much a guys movie, just as most romantic comedies are marketed to women. There is plenty of sexual humor and Star Wars philosophical discussion to tide almost everyone over. And that sort of thing just doesn’t appeal to me. I’m not a prude by any means, but I just didn’t find the discussions all that funny or enlightening. Especially the last scene which I won’t spoil here, but I just found gross. Unless Kevin Smith wasn’t trying to be funny and this was something he has dealt with and in that case, hats off to you, sir.

So one would think I just hated this movie based on the previous paragraph, but that’s not true. I felt a little guilty realizing all that I had missed the first time I watched it. But like I said, I was 18 and with a boy I liked and I had absolutely no experience in life as of yet. But now I’m older and although my minimum wage jobs weren’t as dire, I worked with people who had these experiences. People who were wonderful to talk to and smart, but they were either in a rut or had just enough to get by and enjoy life. I have no idea if that was the ‘point’ of the movie and I have no desire to look it up, but when presented with obstacles, everyone either falls into the ‘Dante’ camp or ‘Randal’ camp. I absolutely loved the fight between the characters at the end of the movie as Randal calls Dante out for all his melodrama. As he says, ‘I wasn’t even supposed to be here today!’, Randal has to remind him how much he brought on himself either through bad choices (cheating on his girlfriend) or being too uptight about things. Throughout the movie I saw Dante’s viewpoint of hell but after Randal talks to him, I realized that we create our own version of hell. Randal seems to be in just as much a dire situation as Dante, but he is aware of that and is happy enough with the situation. Maybe happy isn’t the best word to use, but he has made peace. After all, he’s just a video store clerk and and Dante is a convenience store clerk. Monkeys could be trained to do their job. So, you either stress over it or survive the shift and go out and be happy. That’s a pretty good lesson for a ‘guy movie’. 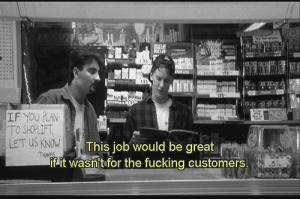 Final Review:  3/5. I’m glad I rewatched this when I was older but it doesn’t endear itself enough to me to watch it again.Then again, this is a favorite movie of my husband so I might not have a choice.

Up next: Splendor in the Grass