Quick Recap: The story starts with an American screwing up by dumping a bunch of toxic chemicals into the Han River in South Korea. Several years later, the chemicals produce a fish monster that can crawl around on land and devour people. A little girl, Hyun-seo, is taken hostage by the monster and it is up to her family to save her since everyone else thinks they are crazy. 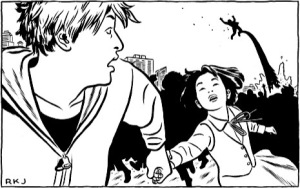 from The New Yorker

Fun (?) Fact: I’m just going to go ahead and spoil this by saying the following fact is in fact, not fun. The movie is based off of a real incident in 2000 when a mortician working for the U.S. Military poured a bunch of formaldehyde down a drain in South Korea, sparking controversy. The film is not meant to be anti-American specifically but North Korea apparently loved the movie so just let that one sink in for a second.

My Thoughts: Horror, as a genre, doesn’t do much for me. Setting aside the fact that EVERYTHING ON EARTH scares me, I think most horror films rely too much on gore and shock and let the plot fall by the wayside. So I love when I get the chance to watch a horror movie that stays with me long after the horror has passed.

I know absolutely nothing about Asian monster films, except that many of them should be taken at more than face value. The very first scene of the movie recreates a real life incident that polluted the environment and led many South Koreans to no longer trust the US, so the director isn’t going for subtle here. On the other hand, most of the movie centers around the family and what they go through in order to save Hyun-Seo and not really so much on how much the US sucks. It was enough to make me feel a little uncomfortable and guilty watching what South Korea must think of us.

The family of Hyun-Seo consists of her dad, useless and lazy, her grandfather who has made mistakes in the past but is trying his best to keep everyone together, her aunt, a medal winner in archery and her uncle, an alcoholic. I wondered for a second if Wes Anderson didn’t have a hand in creating these characters. I most enjoyed seeing how much they fought and yet would do anything for the girl. I won’t spoil all of the hardships the family goes through in rescuing Hyun-Seo, but there are many and it was interesting to see how they reacted to each situation.

Of course, no review would be complete without a review about the monster itself. I admit to getting chills the first time the monster is spotted as it hangs upside down under a bridge. As more people gather, the monster quickly uncurls itself and jumps into the water. People begin to throw food at it and then all of sudden it springs up and starts gobbling everyone in sight. As far as monsters go, it’s not scary in the sense that I would have nightmares, but more of a traditional, Godzilla style scary. I was most uneasy watching it regurgitate its victims.

one of my favorite scenes

One more thought: the movie is called The Host because the monster holds a deadly virus. But it doesn’t actually and it turns out people are just being used for experiments. There is also a plot point where the US decides to help and orders a substance called ‘Agent Yellow’ which will kill the virus. I think the monster by itself was scary enough but I guess adding the virus element gave the director another chance to show how the US has a tendency to put itself into situations it doesn’t belong in.

Final Review: 4/5. I was gunning for a strong 3 most of the movie but the ending pushed it to a 4 because there is nothing I love more than an ending that doesn’t solve everything.

Where I watched it: Alamo Drafthouse. I recently finished reading’The Orphan Master’s Son’, a novel about North Korea. One of the main characters is an actress and in one scene she is shocked that anyone would want to watch a movie on anything other than the big screen. After seeing The Host there, I completely agree.

Up Next: The Ascent