Quick recap: Frank Chambers is a drifter who comes to work for Nick and his wife Cora at a roadside diner. Immediately, Frank starts making out with Cora any chance he can get because that’s just what you did back then. She in turn falls in love and together they hatch a plan to kill off Nick so that they can live happily ever after. Although it turns out to be harder than either expected, Frank and Cora are ultimately successful. Unfortunately, they have been closely watched by the District Attorney and are charged with murder. Then, a million twists happen and Frank is sent to the gas chamber. 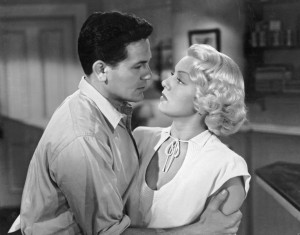 Fun (?) fact: Audiences freaked out while watching this movie once they realized the character of Frank used his tongue at one point when kissing Cora. The horror!

My thoughts:  Ever since I stopped spoiling myself about a movie by reading up on it beforehand, I’ve had to get creative with my predictions. Sad to say, I was WAY off on this one. My husband had already told me it was a crime movie, but I was betting on some back door arrangement, like a postal worker secretly working for the mob or something. In other news, I think I’ve created a plot for the next great blockbuster.

So, The Postman Always Rings Twice falls under the noir genre, which, after looking up the term on Wikipedia, encompasses A LOT of films. It seems as if even experts can’t agree on what constitutes as film noir, although there are some similar characteristics. For example, this movie revolves around the crime of murdering an innocent man in the name of love. Noir films also include convoluted plot lines, which this film delivers perfectly. After Frank and Cora have been accused of murder, the next few scenes are a big mess of plot twists. Frank signs a paper stating he had nothing to do with the murder, only to find out it had been a trick by the DA to get Cora to confess. But then Cora’s lawyer knew what she would do and put one of his guys in charge of taking the confession so that she wouldn’t give one to the DA. He also has her plead guilty but then, at the beginning of the trial gets the DA to drop charges because he really has no evidence. There was much more that happened after that, but I was too confused to keep up. 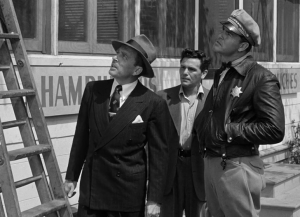 There was also a couple of weird scenes with this policeman, who loved cats.

Another characteristic of a noir film is a bleak ending. After Frank and Cora eventually get married (only because they were threatened with jail for shacking up together), Cora finds out she is having a baby. The two were at each other’s throat since the trial but with this news, decide that they do truly love each other. On the way back from a celebratory trip to the beach, Frank accidentally crashes his car and kills Cora. He is immediately arrested for her murder and sentenced to death. It turns out that the entire movie has been one long flashback and he is telling his story to a priest right before his execution. It is revealed that the DA knew he didn’t murder Cora on purpose but later found evidence indicting him for the murder of Nick so he might as well be executed anyway. That’s not how the law works, but whatever.

In looking at reviews of the film, I found it interesting how many people referred to Cora as the evil one, when in my opinion, that title belongs to Frank. He was the one that seduced her and also the one to first bring up the idea of killing Nick. When Cora’s mother falls ill, Frank drops her off at the train station and then immediately hops in the car with a random woman and drives off to Mexico for a week. Cora isn’t blameless by any means and I loved the decision to dress her in all white to really bring out her darker side. Lana Turner did a wonderful job portraying this character and although I don’t know much about her film career, it seems this was one of her best roles. 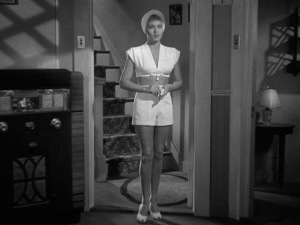 Final review: 3/5, but just barely. The plot was too convoluted and I really didn’t care for John Garfield, who played Frank. His acting was too stiff and unbelievable. In the end, the film kept me entertained enough so it gets a decent rating.

Up next: The Dead, or possibly Casablanca