Fun (?) fact: Many people have been stuck in their own time loop (SEE WHAT I DID THERE?) trying to calculate how long Groundhog Day lasted for Connors. The official estimate is 10 years, although I would say close to 30. One recent calculation came to over 1000 years. 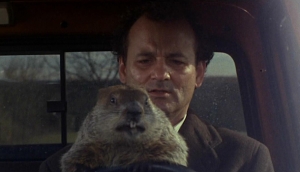 I should try this with my cats!

My thoughts: As you may have picked up on, the Internet loves to obsess over certain celebs. One of the earliest examples was Chuck Norris when people started making up facts about him. And then everyone collectively realized that Norris was a hardcore christian and slowly backed away. More recently, Bill Murray has been the target of such adoration. He recently did a Reddit AMA and answered hard hitting questions like ‘Why the hell did you do those Garfield movies?’ I’m not normally one to get on the Internet bandwagon (except with doge, because that stuff is hilarious), but for once I believe the attention given to Murray is justified. 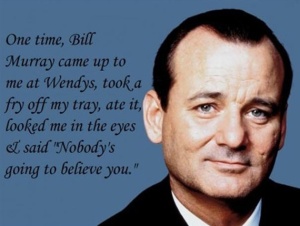 how I wish this were true

I can’t say I have seen too many of Murray’s movies, but I’ll go ahead and put my money on this being one of his best. I came into this movie thinking it would be just a comedy, nothing too special. And this movie definitely is funny. There were several scenes I loved, but mainly watching Murray’s expressions was good enough. At one point, as he realizes he will be stuck reliving the same day over and over again, he decides the only way out is suicide. He drives his truck off  of a hill, he jumps from a building, he stands in front of a car to get hit. The tone became much more dark and the true horror of the situation started to sink in for me. I have no idea what I would do if I were stuck in a time loop, but I imagine it would drive me insane rather quickly. Murray manages to convey the underlying seriousness with humor instead of veering into the ‘sappy moral lesson’ path.

I wouldn’t necessarily say that there was a moral lesson in Groundhog Day. The reasons are unknown as to how Phil Connors got into this situation, although I think it’s just bad karma from being a jerk. It is only after he realizes that being nice to people gets you stuff that he is able to escape to February 3. I don’t think it would hurt for a people to let that one sink in for a bit.

no reason for this picture except that I really like the doge meme.

Final review: 5/5. I could see myself watching this as a yearly tradition because in all seriousness, Groundhog Day is kind of a stupid holiday.

Up next: The Postman Always Rings Twice