Quick recap: An actress in a traveling troupe must choose between 3 men who are in love with her, one of whom gives her a golden coach. But then the actress realizes that she is a self-sufficient talented woman and chooses none of them. In a further ‘screw you’ move, she gives the coach to the Bishop who will in turn use it to help the sick and dying. An important life lesson there: Stick it to your love interests by giving to the poor. I should cross stitch that on a pillow or something.

but first I need to learn how to cross stitch

Fun (?) fact: Director Jean Renoir was the son of Pierre Renoir, the artist. That’s about as fun as I can get on this movie. 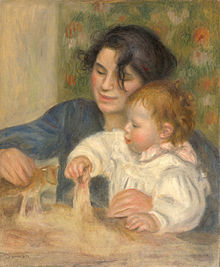 My thoughts: I was afraid to watch this movie for fear I might die from overexposure to pretentiousness. The movie is directed by a French guy, set in Peru, featuring Italian actors. Add to that, the story centers around a Viceroy whose main problem is that he falls for an actress who he can be himself around. You know, a down to earth guy who buys golden coaches. And of course, after giving her this rather extravagant gift, he finds out she’s been seeing two other guys. But really though, the Viceroy should’ve had a bit more common sense than that. Anyone knows that you don’t throw out the golden coach as a gift first thing. If that’s where you start, how can you possibly top yourself?

Visually, the movie is very colorful. The traveling acting troupe’s costumes were gorgeous and made the skits much more enjoyable to watch. I was little confused by the nobility, though. I’m not up on my Peruvian history, far from it, but I don’t think they had a bunch of white guys running around in powdered wigs back then. The plot itself is silly so I won’t analyze it too much. Beyond the colorful costumes and scenery, I was definitely not a fan of the musical score. It was typical classical music, which is fine, but it played THE ENTIRE TIME. Sometimes it was even hard to hear what was going on because the music was so loud. The music didn’t even really match with the plot. If you are going to have a symphony playing at all times, you should at least thrown in a Sad Trombone of Regret or the Triangle of Doom to give the audience cues on how to react.

I’m still confused as to who I was supposed to sympathize with during the movie. Camilla, the actor, is being wooed by a soldier, the viceroy and a bull fighter, one of whom gives her a golden coach.Not really the worst options, if you ask me. As for the suitors, I guess I liked the soldier because he was there from the beginning and Camilla dumped him once she saw she could get something better. The Viceroy annoyed me with his purchases of golden coaches and a never ending trail of women who swooned over him. The bullfighter seemed like a decent choice, minus the ego but isn’t that par for the course for a profession like that? I was a fan of the ending though, Camilla deciding to pursue her acting career and giving the coach away.It was really the best decision because she had caused so much strife within the small community. 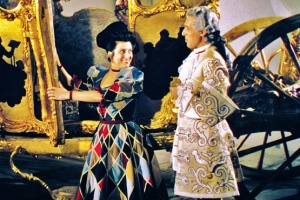 This is how to impress the ladies in 18th century Peru

Final review: 1/5. Not a fan, although this wasn’t traumatic like some of my other 1 point movies

Up next: The Conversation