Quick a recap: This is the ‘making of’ documentary about Apocalypse Now, the movie where everything that could go wrong, did go wrong. 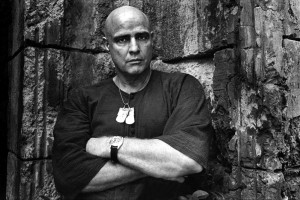 Fun (?) fact: It’s really difficult to find ‘fun facts’ about a movie that is basically ‘fun facts’. So instead, here is a fact about Francis Ford Coppola: George Lucas has said he based the character Han Solo off of him.

My thoughts: After watching a movie on this list the very first thing I do is head to IMDb and Wikipedia for trivia. Most of the time I’m greeted with subpar information about who might’ve been cast in a lead role or who didn’t get along, but then sometimes I land on a goldmine like Apocalypse Now. I don’t know if I could call it the biggest disaster in movie making, but it was pretty bad: shooting in the Philippines during a civil conflict, a typhoon, Martin Sheen’s near fatal heart attack, going way over budget, everything Marlin Brando…..and the list goes on. The distinction this movie has over other disasters, though,  is that it continued to plug along and what was finally released to the public is one of the best movies ever made.

Which makes me wonder how this documentary would be viewed had Apocalypse Now been a bomb. Part of the joy of watching this was seeing all the chaos and knowing that in the end a masterpiece would be created. I loved watching the process of how it all came together and it gave me more appreciation for the director knowing all the fires that must be put out daily between the actors, production crew and even the setting. At the same time, watching Coppola talk about his plan for how the movie would play out, one has to wonder how anything less than a disaster was to be expected. This isn’t some romantic comedy starring Reese Witherspoon; this is a war movie, with the full war experience and big themes woven all through each scene. Knowing this side of the story makes me love the end result even more.

My drawback to this documentary is a big one: I didn’t find it all that interesting over all. I learned nothing new about how the movie came to be, although I was deeply interested watching Coppola and his methods. I blame the internet for this one more so than the movie. Had I seen Hearts of Darkness in 1995, let’s say, it would’ve been shocking to find out everything that happened. As it stands now, all I have to do is read an article on Wikipedia and I’m good to go. What’s left is a compelling enough story about a director and the lengths that he must go through, but not compelling enough for me to enjoy myself very much.

Final review: 3/5. As a personal preference, I’m not a huge fan of ‘making of’ documentaries to begin with.

Up next: Gimme Shelter