Quick recap: A woman,originally from Afghanistan, travels back to her home country to save her sister before she commits suicide. It’s an understatement to say that this movie is a downer.

Fun (?) fact: Hassan Tantai, who played Tabib Sahid in the film, is under indictment in the US for the murder of an Iranian Diplomat. That was decidedly not a fun fact. Sorry. 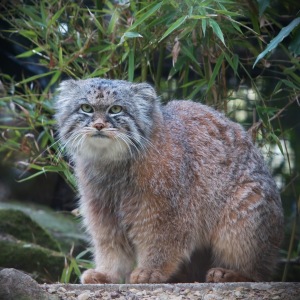 A better fun fact- the Pallas’s cat lives in Afghanistan. This is the most awesome cat EVER.

My thoughts: Kandahar is one of those films where I thought I knew the topic but then while watching, realized that I actually had no idea about anything and should really be ashamed of myself. Being an American I can tell you anything you want to know about the events of 9/11 and yet I still don’t really understand why it happened and who attacked us. Kandahar has its flaws, like almost everything else (except perhaps tres leches cake) but if nothing else, it opened my eyes a bit to what had been building in Afghanistan before it spilled over into the rest of the world.

Concerning the plot, Kandahar is a simple story about two sisters, one who is risking her life to save the other one. The threat of suicide is mentioned at the very beginning of the film and it is shocking to hear, but became less so as the film went on. I understand the purpose of adding that element, so that Nafas has a goal and a timeline, but with each new character introduced I found myself wanting to know more about their background and less about the sister. I think this speaks volumes about director Mohsen Makhmalbaf, an Iranian who manages to humanize a region that most of the world ignored before 2001.

The scenery in Afghanistan made for a visually striking film as well, although many parts were shot in other countries. Director Makhmalbaf also spliced in documentary footage with the fictional narrative, which I’m conflicted about. It was easy to tell what was real and what wasn’t, but it only made me long for more truth. I would’ve been just as content to watch a documentary about Afghan women, but that probably wouldn’t have stood out in the film world like Kandahar ultimately did. I think what makes this movie so meaningful is that we know what is going to happen next, and there is nothing to stop it.

Final review: 5/5. Very difficult to get through, but mostly because I wish I could do more.

Up next: A Tokyo Story