Quick recap: The Prince of Salina comes to terms with his diminishing importance during the late 19th century in Italy. 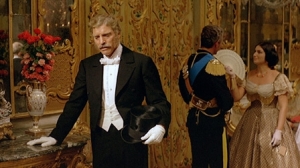 Fun (?) fact: Director Luchino Visconti didn’t like Burt Lancaster in the leading role (maybe because he plays Italian but in real life was Irish? sounds like that would be important). Anyway, Lancaster couldn’t put up with the mistreatment anymore and confronted Visconti, who was so impressed by his passion that they became BFFs 4-ever. 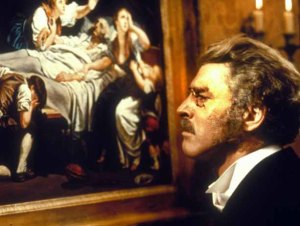 This look is more ‘contemplation’ than ‘brooding’, but still top notch.

My thoughts: IMDb says that The Leopard is Martin Scorsese’s favorite movie. The 1001 Movies book calls The Leopard ‘a cult classic’. Even Giuseppe Tornatore (director of Cinema Paradiso) counts this film as his favorite, although that doesn’t mean too much to me because I didn’t love his film. Anyway, the point is that, on paper, this movie should’ve been amazing, but the reality is that I was underwhelmed. I feel guilty even admitting that, considering how many people hold this film in such high regard. And then I remember how divisive my review of Who Framed Roger Rabbit? was and realized that if I can make it through that, I can make it through anything.

I usually try and start with something positive here, and in this case, since this is an historical film, I wanted to at least praise the director for bringing to my attention this very famous person. Who, after a quick search on Wikipedia, does not actually exist and is merely a fictional character. So there goes my history lesson. I’m sure at least the time period was true but not the Prince or his family. I felt really dumb after learning this but really, I know next to nothing about Italian history so if this movie was about a pod of aristocratic whales storming Rome, I’d believe it.

It’s hard for me to put a finger on why I disliked The Leopard so much. The acting was great, not magnificent. And the plot was a little tedious at times but not excruciatingly drawn out. If I had to nail down a reason, I think it’s because I just didn’t care about these people. The Prince seemed like a good enough guy and it was sad to see his reign slip away, but at the same time, this is the aristocracy we are talking about, so there isn’t a lot of love there.The character of Tancredi, the uncomfortably beautiful nephew, confused me throughout the movie as I could never figure out where he fit in all of this. He and the Prince had a special relationship but I think he switched sides at some point and that probably wasn’t a good thing. There were many plot points I missed when I watched this because I had trouble grasping their significance.

But I can sympathize a bit with the concept of a fall from glory, especially if it is inevitable. The end scene where the Prince dances with Angelica, the daughter of his enemy, was beautiful and a perfect contrast between what things used to be and where they are currently.

Final review: 2/5. Reading up on Wikipedia helped me understand the movie a little better, but there still isn’t much love there.

Up next: Sunrise, which has made me start humming the score from Fiddler on the Roof.