Quick recap: A film maker recounts his life as a young boy in 1950’s Italy when he fell in love with movies. 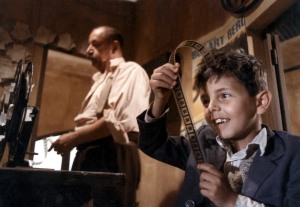 specifically, Toto fell in love with the dirty scenes his mentor Alfredo took out of the film

Fun (?) fact: Filmmaker Giuseppe Tornatore meant for Cinema Paradiso to be an obituary for movie theaters as a whole but when his movie was successful he quietly dropped that idea.

My thoughts: My feelings on Cinema Paradiso have been difficult to put into words because my thoughts are all over the place. I enjoyed the movie very much and might even recommend it to someone looking for something different to watch. But was it a ‘good’ movie? When I die, am I going to look back and say, ‘thank god I had the privilege of seeing this movie’? To the second question first, probably not. To the first, well- that’s the hang up.

I want to like this movie. It’s right up my alley- foreign, not well known, quality acting, an interesting plot. On paper, I should be raving about how this movie changed my life and yet here I am. The problem lies in that Cinema Paradiso is really two films. I watched the much edited version streaming on Netflix, but the original is almost 3 hours long. Maybe that would’ve changed my mind by watching the full thing ,because the pacing seems really off. The first half of the movie is about Toto as a boy, finding a true friend in film projectionist  Alfredo. It’s unbearably sweet how the two interact and help each other out. I especially connected with the concept that movies are magical and bring people together. It reminded me of watching random classic films on tv as a kid. I never really understood what was going on, but it felt important and something that should be respected. When the Cinema Paradiso burns down, Alfredo is caught inside and Toto saves his life. By this point, I was completely hooked.

And then, in one of my least favorite movie tropes, Alfredo (who has been blinded by the fire) is feeling young Toto’s face. The camera moves toward him and then when it goes back to Toto, he has magically turned into a teenager. Yuck. Teenage Toto isn’t nearly as interesting as super adorable kid Toto. He has become very sweet and quiet, not the hellraiser I was used to in the beginning. And he’s in love, of course. The rest of the movie revolves around him trying to get the girl while Alfredo has taken on a ‘wise sage’ role. He convinces Toto to walk away from his job as a projectionist, move to Rome, and never come back. And so he does, which includes dropping the girl he has loved. It isn’t until 30 years later, following Alfredo’s death, that he returns to his old town. Sure, he’s a big shot filmmaker now, but he doesn’t seem all that happy with his life. I think the director was trying to show that following your dreams means making sacrifices but besides the career, he doesn’t seem too successful.

The one redeeming scene comes at the very end of the movie, as Toto sits in a private movie theater and finally watches all the pieces of film Alfredo had cut out for being too ‘obscene’. It’s basically just a supercut of people making out, which is a little weird, but also sweet. This scene didn’t make up for the second half of the movie, but it helped a little.

Up next: Dead Man