Quick recap: Juliet discovers that her husband has been unfaithful and goes on a journey of self-discovery to gain the courage to leave him.

It was an odd journey, to say the least

Fun (?) fact: Director Federico Fellini claims to have taken LSD in preparation for the film. 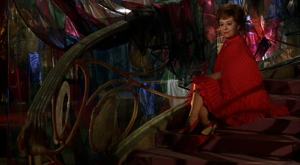 My thoughts: Most women who find they have been cheated on choose to blast girl anthem songs while throwing their man’s things out the door. Not Juliet. She instead turns to mediums, New Age psychoanalysts, sex workers and her own twisted hallucinations for comfort and guidance. At least, I think she did. Juliet of the Spirits was filled with so many symbols and metaphors I wasn’t sure what I was watching most of the time. It sure was pretty, though.

But seriously, this film is gorgeous on so many levels. There are scenes that are so colorful that it practically hurts your eyes and scenes where there are just a couple of colors. All of it is beautiful. When I think of the 60s, I think of a lot of yellows, pinks, browns, and oranges and this film had those colors, but the movie still looks timeless. I wouldn’t go so far to say that it could be mistaken for a modern film, but it definitely does not feel dated, color-wise.

The New Age-y stuff in the film didn’t make much sense because it’s not something I am familiar with, but it did make me curious what rich Italians did back in the 60s. Because according to this film they held séances, made up games where they psychoanalyzed each other, and went down slides after crazy sex. I’m not really sure how all of this helped Juliet, but by the end of the film I think she figured out that she needed to leave her husband. Actually, I’m not even sure that happened. Throughout the film, Juliet has visions of herself as a young child, strapped to a bed of pretend fire. In the end, she crawls through a door in her bedroom and frees the little girl. The two hug and then suddenly it’s daylight and Juliet looks happy. I’ll take a wild guess and say the ending had something to do with freeing herself from the restraints of religion, but I’m not even sure about that.

Up next: A Woman Under the Influence