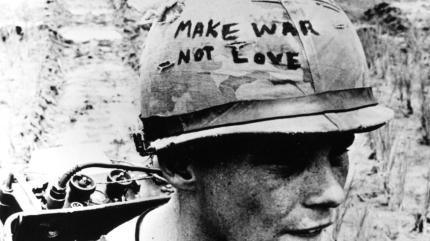 My thoughts: the Vietnam War was bullshit. I already knew that before watching In the Year of the Pig, but the documentary helped me understand more about how we get there in the first place.

That previous line was also bullshit, I’m sorry to say. I still have no idea why the US got involved. I mean, I do at a factual level but logically, it still doesn’t make sense. This film was released in 1968 when we were right in the middle of the war and it pissed off a lot of people because it raised questions. In 2015, I wasn’t shocked by anything revealed in the interviews, but what left an impression on me was the parallel between Vietnam and Iraq War.

And now it’s time for Mary Gets On Her Soapbox:

The Iraq war is/was also bullshit. We shouldn’t have been there but we went anyway because of fear and bad intelligence. And we are about to be in another pointless battle if people continue fearing what they don’t understand.

Back to the review- The hardest part of the whole film was seeing all of the innocent people involved. It’s very easy to look at what the soldiers said about the villagers as condescending and dehumanizing, but I don’t blame them. They didn’t understand why they were there either, and having sympathy for the ‘enemy’, which they were taught was everywhere, would get someone killed. Still, this movie wasn’t afraid to show the reality of war and that our actions, no matter how we tried to justify them, had devastating consequences.

Up next: One-Eyed Jacks, which will sadly have nothing to do with Twin Peaks.