Not that One-Eyed Jacks

Fun (!) fact: Marlon Brando replaced Stanley Kubrick as director and shot 6 times the footage that he needed. This ended up being his only directorial role, which he said was too much work. Considering he spent hours staring at the waves waiting for a perfect shot, he might’ve been doing it wrong? I’ve never directed anything so I guess I can’t say much. 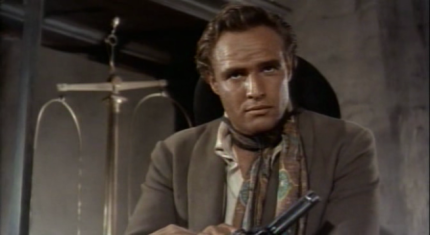 He wore this scarf the whole time and although I think it looks fierce, it kind of looked odd in a Western setting

My thoughts: I’m beginning to not like Westerns. I remember watching Shane for the first time, bright-eyed and bushy tailed at the prospect of a new genre to potentially love. It disappointed me in ways that I’m still not comfortable talking about in public, but I continued on, determined to find something to latch on to. Red River wasn’t as bad as Shane, but was still a disappointment. There were some other pseudo-Westerns thrown in between these movies but I wanted more.Something authentic. Something gritty. Something…not Marlon Brando.

Marlon Brando didn’t necessarily do a bad job in One-Eyed Jacks, but he laid on the ‘vengeance’ thing a little thick. Most of the time he reminded me of a sullen teenager whose mom has taken him to JC Penny’s to buy clothes when he would much rather be at Hot Topic. There is one scene in particular after he escapes from prison in which he rolls his eyes THE ENTIRE TIME. His hat is pushed so far down into his face but you can still see the whites of his eyes. It looked creepy and made me wonder if that whole thing about ‘if you roll your eyes enough, they are going to get stuck like that’ thing was true.

Another thing One-Eyed Jacks lacked was subtlety. In the story, Rio (played by Brando) is a robber, along with his best friend Dad. Yup. Dad. So after one heist, Dad takes the money and leaves Rio to be caught. He is thrown in prison, escapes after 5 years. When he gets out, he learns that Dad ( I KNOW) is now the sheriff of a town and has turned into a model citizen. The two meet again with Dad trying to teach Rio a lesson and help him repent of his stealing ways. In comes the whipping scene. After shooting a guy, Dad strips Rio’s shirt off and whips him for a few minutes. If you think this sounds a little erotic…….it totally does. I was both repulsed and intrigued. 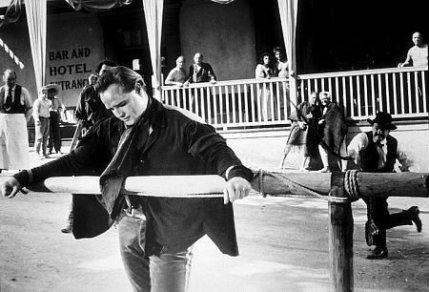 As we later find out, Rio has knocked up Dad’s Step-daughter ( just go with it). He now has to make a choice whether to continue his vengeance or let it go and be with the woman he loves (and knocked up). I won’t spoil the ending, although I really suggest not watching this movie, but let’s just say that Rio has his cake and eats it too. And by cake, I mean that he kills Dad and rides off into the sunset with the girl. Oops.

Final review: 1/5. Please don’t watch One-Eyed Jacks. Might I suggest an episode of Twin Peaks instead?

Up next: The Good, The Bad and the Ugly………..another Western