Quick recap: Lola is a cabaret dancer with guy trouble. There’s Frankie, an American sailor who is in love with her, Roland, a childhood friend, also in love with her, and Michel ,the guy who knocked her up and abandoned her and her son. It is Michel who Lola is madly in love with and spends her days hoping he will return. 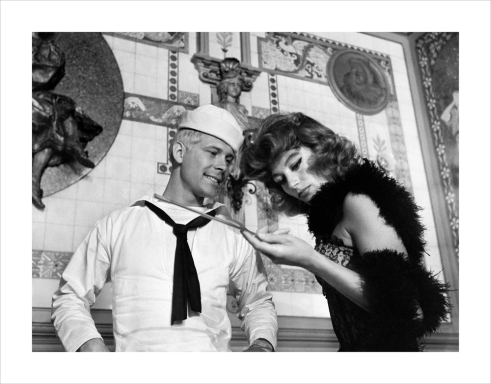 Fun (?) fact: Director Jacques Demy, who has a wonderfully French name, said that Lola is ‘a musical without music’.

My thoughts: For a movie named Lola, there isn’t actually a whole lot of Lola. Which is fine by me because I became very invested in the other characters while Lola herself bored me a bit. I get that she’s the connection between everyone and keeps the plot moving, but I would’ve been perfectly happy had the movie been something like Other Characters Who Aren’t Lola. I would watch the hell out of that.

That’s not to say I didn’t like Lola. The actress who played her, Anouk Aimée is beautiful and charming and really made the character come alive.It’s no wonder everyone was in love with her. My heart (and allegiance), however, belong to the character of Roland Cassard and his unrequited love. He was a mess most of the time- a charming guy who is so unhappy with his life that he enters a diamond smuggling ring (haven’t we all?) in order to get away from it all and do some traveling. After making the decision to participate, Roland runs into Lola and it’s the first time he smiles in the movie. I loved how much emotion was brought to the character of Roland, as he went from hopeful to head over heels to obsessive and finally to bitter as he accepted the fact that Lola didn’t love him back. He wore his heart on his sleeve, and it made me identify with him all too well.

Director Jaques Demy also made the film The Umbrellas of Cherbourg, which I loved, although I think I enjoyed Lola more. There were so many instances of characters having a connection to each other that it became a little silly, but on the other hand, it gives the movie an almost fairy tale sort of feel. And even though it ends badly for Emo Roland, Lola’s first love, Michel, comes back just as she is about to leave the city and everyone (except Emo Roland) lives happily ever after. It’s sappy but it works.

Up next: Blonde Cobra