Quick recap: Set during the Depression, a group of showgirls find work in a new Broadway play and new love with a mysterious benefactor. 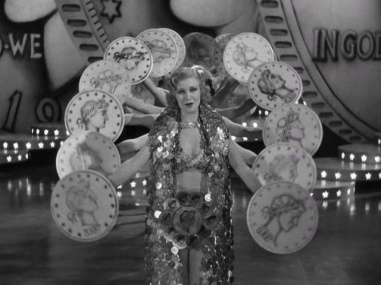 Fun (?) fact: This movie is where the song ‘We’re In the Money’ comes from.

Not even kidding, this creepy kid gave me nightmares

My thoughts: I think it’s best to start with a quotation of lyrics from one the most famous songs from this movie, so that you can better understand what I had to watch:

From ‘Pettin’ in the Park’:

Yeah. And there’s a delightful scene where the girl in the show physically struggles but the guy continues to hold her tight. Then there’s a rainstorm and the girl gets soaked and has to change. She chooses to put on a metal dress to hopefully stop his advances, but nope! The creepy child from the gif above just happens to have a tin can opener which he uses to cut through the dress.

So, besides all the implied assault (and believe me, there’s A LOT), the movie just felt jumbled together. It’s supposed to be a movie about a broadway play (Fun!) and there are also crazy antics where the group of girls pretend to be gold diggers to piss off snotty rich men who hate love (fun!). But this is during the Depression after all, so the last song of the movie is about remembering our soldiers who marched off to war and who are now marching in bread lines, trying to survive (Bummer). And to be fair, there is a lot of talk about the Depression, so it wasn’t just thrown in, but there’s a ton of money thrown around in the play and instead of a song, why not use some of that money to help people rather than building a contraption that makes it rain and snow in the theater?

The love story between Polly and Brad was cute, but mostly because Dick Powell, who played Brad is quite the looker. His warbly voice kind of threw me off but I was smitten throughout most of the movie. The girls also seemed like a fun group, especially Trixie, and I think this would’ve been something I would’ve loved to watch over and over again in the 30s.

I could do without the creepy kid though

Final review: Despite the fun I had, I’m going to go with a 3/5 because of the kid and because there were some really slow parts