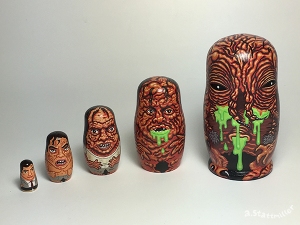 Fun (?) fact: In a deleted scene, Brundle fuses together a cat and baboon and is so disgusted with the creation that he  beats the animal to death with a pipe. Producer Stuart Cornfeld said, ‘If you beat an animal to death, even a monkey-cat, your audience is not gonna be interested in your problems anymore.’ 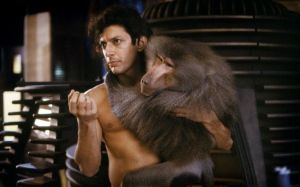 My thoughts: I’ve made some really bad choices when it comes to guys I’ve dated, but at the very least I can say I’ve never fallen for an eccentric scientist who fuses his DNA with a fly and then impregnates me with his Maybe Fly Spawn. I’m a mess, but not Geena Davis in The Fly kind of a mess. So, there’s that inspiration.

I was warned by my husband that his movie was super gross and I should maybe rethink watching it. Boy, was he right! It didn’t start off disgusting, and I got kind of bored after awhile with the build up. But then, there was a scene where Brundle peeled off his fingernails and I almost lost it. It all went downhill from there. The Fly didn’t terrify me, but it stuck with me in a way most movies won’t. Even now, almost a week after watching it, I’ll randomly think of the scene where Brundle vomits on his food to liquify it and it will make me queasy. In that sense, The Fly is a perfect example of a horror film.

Vincent Price, who was in the original Fly loved the remake but thought it went a little too far at the end. Totally agreed. I think a good stopping point would’ve been the nightmare of giving birth to the Fly Spawn or when BrundleFly detailed how he ate his food. But all that stuff of him trying to kill the ex-boyfriend and then fusing himself with the teleporter was just over the top for me. I still felt sorry for him in a way, kind of, but I would’ve had no problems killing that mess at the end. And can we talk for just a second about Geena Davis’ character, Veronica? That girl has issues. She dated a jerk of a guy and then immediately fell for this eccentric weirdo. I mean, I guess he was cute, but him drunkenly teleporting himself because he was jealous would’ve been it for me. But not for Veronica. She kept coming by, even when he had completely turned insane and terrifying. She couldn’t have seen this coming but geez, girl, get some standards.

Final review: 3/5. I wavered on this one, almost giving it a 4 but I’ll be too scarred to eat donuts for quite awhile.