Quick recap: A pair of cops go after a drug smuggling cartel with a connection. A French connection, if you will. 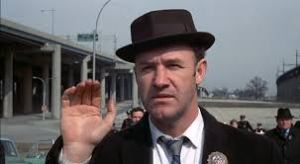 Fun (?) fact: Lee Marvin, current Night Vale Resident, was initially offered the role of Doyle but turned it down because he didn’t like cops. He went on to star in other roles and is just about to celebrate his 30th birthday.

My thoughts: The French Connection reminds me of my non-existent days in the hood, where the drugs were rampant and everyone was just trying to get by in Brooklyn. I’ve never really gotten into cop films or tv shows (except The Rockford Files because of that sweet French Horn solo), but it gives me the same nostalgia as most Westerns do.

Plot-wise, the movie is pretty direct. The cops are trying to catch the drug cartel, but the audience knows who it is because we’ve been watching them from the beginning. It was just a matter of the two finally meeting each other. I was really curious what The French Connection meant until the opening scene, which is set in France. That’s when I realized that there is LITERALLY a French connection. I always like titles that just tell it like it is.

I enjoyed Gene Hackman especially, but everyone did a fine job in the film. The story is based off of real events, although I think only loosely. The duo reminded me of a podcast I’ve recently gotten into, called Stranglers, about the Boston Strangler of the 60s. Although the story itself fascinates me, I mostly love hearing from these old retired cops and the lengths they went to in trying to catch the killer. Much like those cops, this drug case consumed Doyle, to his detriment. I won’t give away the final scene but it didn’t really surprise me. Throughout the movie I kept wavering between whether I should root for Doyle or not, but I think it’s just the way things were done back then. He really wanted to solve the case and get the drugs off the streets and was willing to do anything to make that happen.

I’ve described your stereotypical cop film so far,yet there is something about it that just stands out for some reason. For me, I think it’s the combination of gritty landscape and ominous music. I love films from this decade and The French Connection fits in perfectly for that time period. It’s also a good reminder that despite what certain politicians think, things have gotten better.

Up next: Boogie Nights

One response to “#293- The French Connection”