Quick recap: A mysterious harmonica player seeks revenge for the death of his brother and also protects a widow who has lost the only family she has ever known.

Fun (?) fact: When Henry Fonda was chosen as the bad guy, he arrived in Italy with dark contacts and a mustache. Director Sergio Leone made him get rid of the costume because he wanted the audience to recognize his blue eyes and be shocked Fonda was a bad guy. 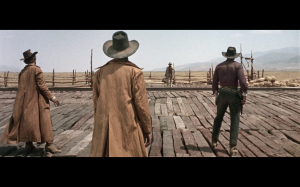 Sergio Leone directed this movie as well as The Good, the bad and the Ugly, so I knew what I was getting into, but still, this movie seems much darker. In one of the first scenes, bad guy Frank shoots an entire family, including a young boy. I thought Frank might take the boy in or something or at least let him fend for himself until someone discovered the massacre, but nope. The following scene as the widow looks at each body of her family was incredibly hard to watch. I’m not sure what I imagine when I think of the Old West (mainly because I don’t think about it too often) but it’s something darker than Rio Bravo but not as dark as this.

It’s difficult to put into words what I loved about this film because everything just fit together so well. It’s a masterpiece. The music is perfect and as I’ve mentioned above, the scenery is beyond amazing. Sergio Leone captured the desolation of the West in a way no one else has. The only thing I didn’t love was the plot. It was too complicated for what I’m used to for a Western. At the end of the day, Frank was a bad guy but also just a henchman for the powerful and rich. It’s a great metaphor for today but I guess I was wanting something a little more simple. Still, it’s an essential film. At the very least, watch the first 15 minutes or so as the bad guys wait for the train. You just can’t get better filmmaking than that.

Up next: Mr. Smith Goes to Washington. You better believe there will be plenty of Simpsons GIFS for that review.