Quick recap: A man leaves his wife for another woman. She, in turn, picks up a younger man at a bar while out with friends. Everyone stays miserable. 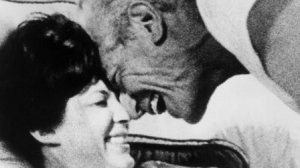 Fun (?) fact: Considered one of Steve Buscemi’s favorite movies, an actor I love. But Faces also inspired Robert Altman, who I definitely don’t like, so I feel like these facts cancel each other out. Carry on. 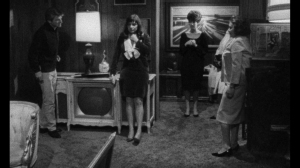 What a fun party! I hope there’s some cringeworthy dancing about to go on.

My thoughts: Many times I watch a trailer and the first thing that comes to my mind is, ‘ What kind of person would watch this?’. So, as a public service I’m going to list the sort of audiences that will appreciate Faces. Feel free to watch if you:

The style of Faces was its strongest point for me. At first, it seemed like a documentary but now I think it’s more similar to a home movie. There were some really confusing scenes because there is no music, no voiceover, and no real transition from moment to moment. But it also made the film seem more real, like I was really watching these two people become more and more miserable. I also liked that this was a ‘slice of life’ film, meaning that there is no background given on either character. I’d like to say that the main character Richard Forst is a Grade A asshole, but maybe his wife Maria has her own issues. There are a few hints, however, that just show Forst is Don Draper but without charm.

The characters were all believable and many of the actors were just random  people invited to the set. All this being said, I never connected with anyone. I found myself watching two miserable people without feeling anything about either of them. When reading up on Faces, several commenters said that this movie has many layers, and maybe that’s true. But watching two sad people was enough for one viewing and I don’t feel like digging any deeper.