Another reference I now understand!

Fun (?) fact: Vertigo bombed at the box office and Alfred Hitchcock put the sole blame on James Stewart for being too old, despite having collaborated with him several times. They never worked together again 😦

My thoughts: This is either my 7th or 8th Hitchcock film and they just keep getting better. Hitchcock is best when he goes dark-whether it’s the macabre dialogue in Strangers on a Train or the serial killer plot of Frenzy. Vertigo is no exception. This was my first time watching it and about the only thing I knew was the fear of heights. There’s a twist at the end that I didn’t see coming and when everything is revealed at the end of the film, I audibly gasped. It’s so rare these days to not be spoiled.

Vertigo’s strong points are its visuals, a very Hitckcockian thing to focus on anyway. Every scene looked like danger was just around the corner and it kept me on my toes to figure out what was going to happen next. The shots of John Ferguson freaking out while climbing stairs are iconic but I gravitated more towards the little scenes, such as John watching Madeline at the art gallery or him watching her drive off in her car. It was a wonderfully creepy feeling to not know whom to be more concerned about.

Knowing what I know about Hitchcock, it’s really not much of a surprise how he chose to portray the women in the film. There’s Midge, possibly still in love with John, and jumping at every chance she can to be near him. And then there’s Madeline, who thinks she is the reincarnation of Carlotta Valdes, a woman who died a hundred years ago. Neither woman gives off a strong independent vibe and it’s a little frustrating to watch a whole movie about women fighting over men and needing them to survive. On the other hand, it makes for a compelling movie where you don’t really root for anyone. 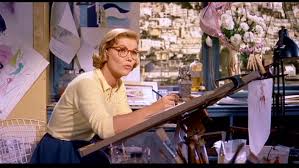 always a Midge, never a Madeline

Up next: Sunset boulevard