Quick recap: A serial killer is loose in London, this time raping his victims and then strangling them with a necktie. It is revealed who the killer is early on so the movie becomes more of a mystery as to how the killer will get caught. Two men, Bob Rusk and Richard Blaney, are in the center of this series of murders- the killer and the man accused of all of the crimes, respectively.

Fun (?) Fact: Alfred Hitchcock had originally planned to do his cameo at the beginning of the movie as a dead body floating in the river, but it was later changed to a nude female because no one wants to see a naked Hitchcock. 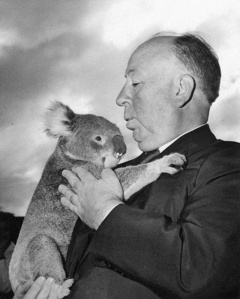 Hitchcock and a koala

My thoughts: This  was my second Hitchcock film, the first being North by Northwest. I was excited to see ‘Frenzy’ because it is the style he is so well known for. This would end up being one of Hitchcock’s last films and it is also one of his dirtiest, receiving an ‘X’ rating at the time of release. An example of the well earned ‘X’ comes from a joke at the beginning of the movie as a woman and man are discussing the murders and the woman mentions that the victims are raped before they are strangled. The man replies, ‘ There is a silver lining to every cloud’. Lovely.  There’s also a surprising amount of nudity in this film, which doesn’t necessarily bother me except in the case that it is being used for shock value.

The plot itself is an interesting one and reminds me a bit of SPOILERS Gone Girl, because the main character acts so incriminating but is in fact innocent. There is a lot stacked against him seeing as how both his ex-wife and current girlfriend are murdered. The case seems like an open and shut one, except not really because the other 9 or so murders are never mentioned once Blaney is fingered as the serial killer. He looks guilty of murdering the two women but he must’ve certainly had an alibi or evidence in his favor for the the others. Rusk, the true murderer, came off as fake to me from the start but I don’t blame the police for not investigating him.

He also reminds me of Rex Manning, another jerk

The murders themselves are quite gruesome and made me feel extremely uncomfortable watching them. Like everyone else, I watched the body of the ex-wife and she was breathing SECONDS after he had just killed her. She could’ve at least practiced holding her breath while the camera was on her. It kind of ruined the moment for me. The most disturbing scene for me was when he took Babs, pictured above, up to his apartment to murder her. She of course has no clue what he will do and as he closes the door, all sound is cut off and there is a gorgeous long tracking shot as the camera leaves the door, goes down the stairs and into the busy market street. It was so much more unnerving knowing what he was doing and that no one would be able to jump in and save her. Apparently this is a trademark of Hitchcock’s to do a long tracking shot and I can see its effectiveness.

There are a few parts of the film that were humorous, like the subplot of the investigator’s wife serving him awful food because she was in culinary school. It was a nice contrast to all the grisly details the audience was having to see. Another oddly humorous scene comes when Rusk has just murdered Babs and puts her in a potato sack only to discover she died with a handful of incriminating evidence. The scene itself wasn’t funny, but the idea that the serial killer had managed to survive this long, only to get stopped by a sack of potatoes.

Final review: 3/5 Hitchcock knows the genre and practically invented it, but this wasn’t the best example of his work.

Where I watched it: Alamo Drafthouse!

Up next: The Best Years of our Lives