Quick recap: Tracy Lord, daughter of one of the richest families in Philadelphia, is about to get married for the first time. The only obstacles in her way are her ex-husband and a tabloid reporter who also just happens to be in love with her. What’s a girl to do? 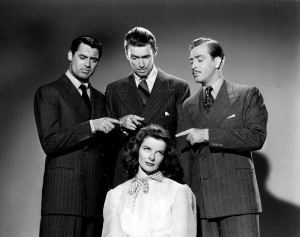 ok,Katharine, give me the ‘oh, you guys’ look and boys, why don’t you just stand around her and…I don’t know, just point at her scalp. Perfect!

Fun (?) fact: 3 things I learned about James Stewart that endeared him to me even more:

I’m just saying, if there had been a James Stewart/ Cary Grant buddy comedy, maybe the world wouldn’t be in the mess that it’s currently in

My thoughts: To kick this off, I’d like to first acknowledge the elephant in the room: High Society. I watched it way back in the beginning of this blog and if you care to click the link, you will find that I didn’t enjoy it very much. I still stand by that review, except now I know it was just a remake, I kind of wish I could go back and lower my score. Which, I totally could, considering this is my personal project but something something about precedent and high standards and all that.

So, without a doubt, I enjoyed The Philadelphia Story infinitely more than High Society. The main reason being that I didn’t have to sit through all that silly singing. The plot made much more sense this time around, although I still classify it as ultimately silly. And I also LOVED the casting here. It makes even less sense to me why Grace Kelly would be chosen for the role Katharine Hepburn was made for. There was so much chemistry here, especially between Hepburn and Grant. Stewart seemed like an odd choice but he totally made it work. Everyone here was just perfect and although I didn’t really laugh much, I enjoyed myself thoroughly.

That being said, this movie is hella problematic. In the very first scene, Dexter is leaving Tracy and as he is about to drive off, she storms out and breaks one of his golf clubs. This sends him into a rage and he comes after her, knocking her to the floor. Thereafter, the incident is referred to almost as a wistful, funny memory most couples have. I spent most of the movie either being disturbed by the lengths Dexter was going to in order to win Tracy back (like giving her a model of their honeymoon boat as a wedding present) or admiring him for his persistence. I still don’t know how I feel about their relationship but at the end when they decide to SPOILER remarry, they seemed genuinely happy and hopefully had both matured since then.

Up next: Jules and Jim