Quick recap:  Sean Thornton (played by John Wayne) moves back to his hometown in Ireland, where he falls in love with a feisty redhead and makes an enemy of her brother.

Fun (?) fact:  Maureen O’Hara whispered an unscripted line in John Wayne’s ear at the end of the movie to get a genuine shocked expression on his face. Neither she nor he or director John Ford ever revealed what that line was. 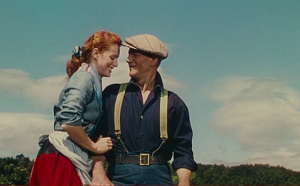 Seeing as this is my 400th review, I chose a film I could easily snark on. So much low hanging fruit- from the casting of John Wayne to the ridiculous Irish accents, I was planning to let loose! But alas, I can’t, because I have fallen in love instead with The Quiet Man.

It may be the pandemic talking, but even the crowd scenes were lovely and made me feel like I was watching a real village. The horse races, the fishing obsession, the large gatherings to watch a man drag his wife across the countryside-I wanted to be part of all of it. The residents of the town all had stereotypical personalities and VERY thick Irish accents but it only added to the charm of the film. It was absolutely believable by the end of the movie that a person like John Wayne would settle in and find a wife just like Maureen O’ Hara.

What really drives the film for me is seeing Sean Thornton’s journey to truly fitting in to this sometimes backwards society. When he first rolls in (literally, in a horse and buggy) to Inishfree, he wants to move in immediately but his mind is still planted in the US. He initially scares Mary Kate Danaher by just walking up and saying hello and it takes him awhile to understand that things are done differently around here. I love how the movie is as much about character growth as it is a romance film. By the end, Sean has his girl after beating up her brother (also a tradition?) and all is right with the world…

Which leads me to my one big complaint about the movie- how often Sean shows that he ‘owns’ Mary Kate. The first time they have any sort of real interaction, she sneaks into the house he just bought and tidied up a bit. Upon catching her there, he kisses her hard and I can only imagine how bruised her lips must’ve been after that scene. This happens several more times when Sean loses his patience, including their wedding night when Mary Kate refuses to have sex with him for very (in her mind) valid reasons. And then there’s the penultimate scene where he literally drags his wife across the countryside, sometimes even pulling her hair so that he can ‘collect’ her dowry from her brother and they can finally consummate their marriage. Everything ends up fine and this was what audiences liked to see back then but geez, it’s still hard to watch and enjoy.

Up next: My retrospect of the last 100 films